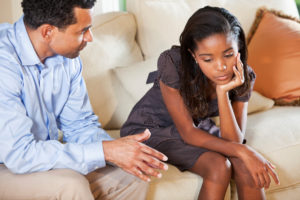 Adolescents who feel heard have better mental health and a greater sense of self-worth in both the United States and Ghana, according to a study published in the journal Child Development. Teens in both cultures had more positive outcomes when their parents listened to them, suggesting the importance of open communication between children and parents in vastly different cultures.

But giving teens the chance to share in decision-making and make their own choices only benefited American teens, pointing to the role cultural values can play in adolescent outcomes. This indicates that mental health practitioners may need to adjust their approach to shared decision-making based on the expressed needs or cultural values of those they work with in therapy.

Listening to Teens: Outcomes in Individualist and Collectivist Societies

The United States is widely regarded as an individualist nation that prioritizes self-reliance, independence, and autonomous decision-making. According to the study, Ghana is a more collectivist nation. Collectivist cultures are concerned about the impact of an individual on the family or social group and tend to see a person as inextricably linked to a broader community.

Researchers gave questionnaires to 245 seventh and eighth graders from the United States and 156 from Ghana. The questionnaires asked questions about the extent to which parents let teens play a role in decision-making and whether the teens’ parents listened to and acknowledged their views. They also asked about how controlling parents were, how motivated teens were at school, and mental health factors such as depression and self-worth.

Teens whose parents encouraged them to openly share their opinions expressed higher levels of academic motivation, school engagement, and self-worth. They were also less likely to have depression. In the United States, shared decision-making further improved mental health, motivation, and other outcomes.

Previous studies have reached conflicting results about the value of shared decision-making and encouraging teens to express themselves. The study’s authors argue that their results help resolve some of these conflicts. They emphasize, however, that variation between families and parents may be as important as variation between cultures.