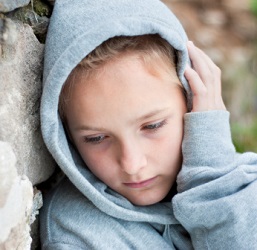 Most people have heard of—and perhaps even participated in—the nature-versus-nurture debate, but an increasing body of research suggests that the dichotomy between nature and nurture is a false one. A new study on the effects of abuse in children has found that traumas such as neglect and physical abuse can change the way children’s genes are activated.

Not all of your genes are active all of the time. Instead, the genes are turned on or off as a result of both environmental and biological cues. One way genes are activated is through a process called DNA methylation. Previous research has shown that children exposed to abuse have more difficulty regulating their emotions and socially interacting with others. A new study, published in Child Development, aimed to understand the genetic underpinnings of behavioral changes in abused children.

Changes in the glucocorticoid receptor gene—also known as NR3C1—could help explain changes in abused children’s behavior. This gene is thought to affect social skills and mental health. Researchers drew blood samples from 56 children ranging in age from 11 to 14. Half of the children had been physically abused. They found that children who had been abused had increased methylation on several areas of the gene, most notably an area of the gene that helps produce nerve growth factor. Nerve growth factor plays a vital role in brain development. All of the children had normal NR3C1 genes at birth, suggesting that the abuse—and not biology—changed the behavior of the gene.

The Steep Costs of Child Abuse

About a million children are abused every year, and most cases of child abuse are not reported to authorities. Thirty percent of adult child abuse victims abuse their own children. It’s certainly not news that child abuse is bad for children and for society, but this latest study provides clear evidence that the effects of child abuse last well beyond childhood.

Although changes in gene activation can dramatically alter behavior, these changes don’t necessarily have to be permanent. Some previous research has suggested that, when parents stop abusing their children, the methylation effects of abuse may actually be reversed. The study’s authors emphasize the need for more research into this possibility and highlight the importance of early interventions for children exposed to abuse.