“Aren’t You Better Yet?” A Mother and Daughter’s Journey through Cancer 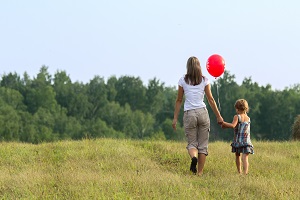 Christa, 35, became interested in therapy because she wanted a place where her 10 year-old daughter, Nina, could share her feelings about Christa’s breast cancer.

Christa’s prognosis was good, but she was having a number of residual side effects from her chemotherapy, such as debilitating fatigue, achiness, and difficulty getting moving in the morning. Christa felt Nina wasn’t very supportive of what she was going through. Christa was also concerned for Nina because she and Nina’s father were divorced, and he wasn’t very involved in Nina’s life.

Nina was a precocious girl who loved to draw. The therapist, who always had art supplies available to Nina, asked her to draw a picture of her family in the first session. The therapist gave no other instructions. Often children ask who should be in the picture, to which the therapist replies, “Whomever you think of when they think of your family.” Nina drew a happy scene, placing herself very close to her mother, with her grandparents nearby. Nina’s father was not in the picture. Without words, Christa’s concern about Nina’s relationship with her father was validated.

Nina expressed that she thought Christa should be “all better now,” since the cancer was removed and chemotherapy was over. Given Nina’s developmental stage, this was not surprising. She was nearing the age where she would begin developing abstract thinking skills, but she wasn’t there yet. Also, Nina missed the time she and Christa used to spend together before Christa got sick. Previously, they had been very active outdoors, going camping and playing softball together.

The therapist had Nina draw pictures of her life and herself before and after Christa got cancer. The before pictures were very colorful, with butterflies and sunshine and a cheerful Nina. The after-pictures were in black, the sun behind a cloud, with dead flowers and a much smaller Nina with a grim expression.

The therapist alternated sessions so that sometimes she met alone with Nina or Christa, and sometimes saw them together. Christa had limited support from family and friends, so her solo sessions gave her an opportunity to express her sadness, grief, feelings of being overwhelmed, concern for Nina, and sense of loss of control over her life. These feelings are very common for people dealing with cancer. Not only does cancer rob the patient of control, but also everyone else in the family. Wherever a client or family member can gain a sense of control, no matter how small, it is crucial for them to seize it; it helps to preserve a modicum of order in the chaos that cancer brings.

Christa learned about the developmental stage Nina was in and how important it was for Christa to let Nina be a child, not Christa’s main support person. Nina had previously shared that hearing about the details of their financial difficulties was really stressful for her, and that she was tired of hearing Christa talk about not feeling well. Christa had no idea that Nina was feeling this way. She and Nina came up with a code word that Nina could use whenever she needed to let Christa know she didn’t want to hear about Christa’s illness anymore.

As a pre-adolescent and the child of a cancer patient, Nina needed to be able to have more control over her life in a reasonable way. Nina’s biggest complaint was having to clean her room daily. Christa shared that a messy room made her anxious. Nina and Christa were able to come to a compromise in which Nina cleaned her room twice a week and chose which days to do it.

As a result of these interventions, the bickering between Christa and Nina decreased significantly. Christa continues to educate herself regarding the developmental needs of pre-adolescents, and Nina is able to set parameters around how much Christa’s illness is a part of her life.