A Happy Partner Is Good for Your Health, and Other News

Having a happy partner has been linked with better health outcomes for middle-aged and older adults over time, according to a report published by the American Psychological Association. Health and happiness have been linked by a multitude of previous research, but little information exists about the relationship between health and the happiness of significant others.

The study included almost 2,000 heterosexual couples ranging in age from 50 to 94. Participants completed surveys designed to measure happiness along with a range of health markers, including rate of physical activity and incidence of chronic illness. The statistical analyses first confirmed a relationship between a person’s own happiness and their state of health. Controlling for this effect, it was shown that the happiness of a partner also had a significant association with one’s own health.

The researchers list a few potential reasons for this association. A happy partner may be able to influence an unhappy person to join more social activities or environments that contribute to good health, happy partners are more likely to give their partners strong support, and happy partners may be able to provide a sense of ease in their relationships.

Happiness and health may be even more intertwined than previous research has shown. This study is one of the first to test for and validate the existence of a link between health and the happiness of one’s partner. A continuation of this line of research could lead to novel developments in health care, couples therapies, and a variety of other fields.

Lawmakers from both of America’s major political parties praised the passing of a bill that will support funding for a training program that teaches frontline mental health interventions to members of the general public. The course will be primarily offered to those who are the most likely to become first responders for mental health crises, such as teachers, police officers, and firefighters. Passing the bill is being described as a small but important step toward improving support for people with mental health conditions.

A recent review of existing research suggests mothers who experience depression during pregnancy are more likely to give birth to children who display behavioral and/or emotional issues later in life. The study focused on low and middle-income countries because these populations are often at a higher risk of depression in pregnancy. Much of the existing research focuses on high-income populations, but the researchers say more investment in this type of research is needed for low-income populations along with low-cost interventions. Based on existing research, the authors suggest the association could be a result of prolonged fetal exposure to the stress hormone cortisol. 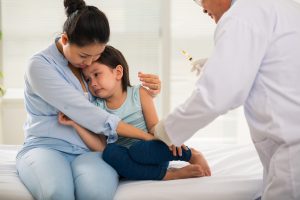 Getting a shot can be a stressful experience for children (and often for adults). Researchers have shown the use of music therapy may promote healthy coping behaviors in children during immunizations. The experiment featured a music therapist who played children’s songs and encouraged participation as they were given an immunization shot. Children also displayed less distress during the procedure (as rated by parents) in comparison to those who were given shots without the presence of a music therapist.

Trying to Break Unhealthy Habits? There’s a Coach for That

Researchers have noted a trend in health care toward treating people before they become sick. Because of this, many employers and health care systems are adopting wellness programs along with wellness coaches. A new study has found an association between wellness coach services and improvements in several important health measures. After the completion of a 12-week program led by a wellness coach, the majority of participants had lost weight, gained better eating habits, and increased their time participating in physical activities. A follow-up at three months found the participants were still in better shape than before the study began, though a small reduction in the original gains was noted. It is possible these losses could have been averted by continuing to engage with a wellness coach.

Most Parents of Teens Back Classes on Sex Ed, Mental Health

A national health poll of American parents has determined most are in favor of their teenagers learning about sex, pregnancy, drug abuse, mental health, and several other topics once considered taboo. This represents a significant shift in opinions when compared to 40 years ago, when sex education was either restricted or banned by 20 states. The majority of parents surveyed also wanted their children to learn more in school about accessing health care systems and basic skills such as first aid and CPR.