3 Ways to Start Becoming Your Own Biggest Fan 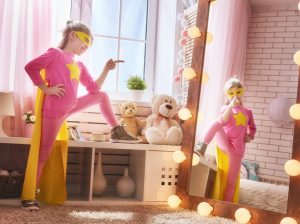 I have two toddler-aged kids. They regularly take my breath away with their often-unexpected highs and lows. But one thing I have noticed remains constant for both:

My younger son smiles at himself in the mirror, kisses his own lips, and plays with his reflection. My daughter, a little older, admires whatever she is wearing, whether she is dressed up as Queen Elsa or Iron Man or showing off a wildly mismatched outfit she has put together herself.

The radical idea here is we all started off that way.

We are born into this world believing we are both entitled to everything we need and deserving of love, care, and attention. We inherently know we are creative, capable, and up to the challenge of whatever developmental milestone we face next.

Our work was to play, and whatever that looked like, we expected it would be engrossing, entertaining, and rewarding.

So what happens between then and now?

I work with people every day, generally accomplished and highly functioning, who feel unworthy, less than, valueless, lonely, and emotionally terrified of getting life wrong.

When did we stop being our own biggest fans?

We live in a time and place where we are encouraged to feel less than adequate. Or, dare I say it, less than absolutely thriving. Early on, we are bombarded from every direction with images and messages to weigh less, accumulate more, look better, stay younger, and generally “have it all.” For many people, this messaging inevitably advances into an unconscious pattern of negative self-talk, which I call NST.

Why is NST so detrimental to our well-being? For one thing, it is pervasive. It is so deeply ingrained in our culture to be overly self-critical. It is very awkward for many people to think or speak of themselves in positive terms.

I often sit with people in therapy who berate themselves to such an extent I would call it downright abusive. But even if your NST is not at the point of emotional self-abuse, can you imagine how your quality of life might improve if you were more charitable with yourself?

So how do we turn this around and once again become our own biggest fans?

While continued growth and challenges are important for development throughout our lives, can you imagine thriving not just in spite of yourself but because of your own self-care and encouragement?

I understand many people fear practicing kindness toward themselves could lead to contentment and therefore a lack of progress. Some feel being critical of themselves is what drives them to success and excellence.

I would argue otherwise. While continued growth and challenges are important for development throughout our lives, can you imagine thriving not just in spite of yourself but because of your own self-care and encouragement? While I believe endless self-critiques can spur someone to press on, it is rarely going to be truly inspired progress.

Whether you engage in therapy or counseling or not, everyone can benefit from acknowledging and doing the work of countering negative self-talk. Not only may you flourish when you embolden yourself with positive reinforcement, you may enjoy your success and quality of life that much more.