3 Simple Tips on How to Apologize Effectively 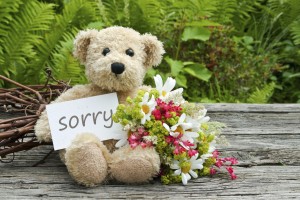 Conflict is an unavoidable part of life. While many scientists believe natural selection has influenced numerous species to seek victory in the face of conflict, other organisms, including humans, value relationships even after a conflict has occurred. We are, after all, highly social creatures.

So how can we salvage meaningful relationships after a fight with our loved ones and seek reconciliation? One critical way is by learning how to apologize effectively. A recent study conducted by McCullough, Pedersen, Tabak and Carter (2014) shows that there are three specific conciliatory gestures that go a long way toward reducing reactive anger and earning forgiveness. If you are currently plodding along the lonely path to redemption, consider these crucial steps to apologize effectively.

After hours of hurling insults, many people struggle to conjure up the courage to say “I am sorry.” To some it is almost akin to admitting defeat, and no one likes to lose. Many people go to great lengths to avoid uttering those three little words. Instead, they may buy flowers or offer a back rub, convinced that surely this must be enough. But is it?

Words are powerful. McCullough et al. (2014) found that people who experienced a conflict forgave easier if they thought they were less likely to be hurt again in the future. With this is mind, offering a sincere apology can be a better (and more cost effective) way to give our loved ones reassurance that we have made a commitment to avoid hurting them similarly in the future.

It is easy to think you are the victim in an intense verbal spat with a loved one. We tend to minimize our own errors while exaggerating the mistakes of others. This is the way we rationalize and justify our actions in conflicts. Simply put, we make excuses.

But if earning forgiveness is your ultimate goal, then attempt to be less defensive the next time you find yourself in a fight. Stop making excuses for yourself and your behavior and own up to your actions.

Why is this step so important? McCullough et al. (2014) claim that taking responsibility for your own wrongdoing in a fight can significantly improve the way the other person sees you. In other words, taking a moment to step back, breathe, and admit your fault can move you a long way forward on the road to forgiveness.

3. Pay for Your Mistakes (Literally and Figuratively)

Ask for the chance to make up or pay for your wrongdoing. This conciliatory gesture is even more effective if it comes at some personal cost to you. So pay for that broken window with your allowance, buy your sister a new pair of headphones to replace the ones you broke, or offer to help your spouse with extra housework after a squabble. In the end, you will be further along in the forgiveness process.

As previously stated, humans are not the only species that use reconciliatory gestures. Many group-dwelling mammals and other vertebrates also seek to resolve conflicts using similar means. According to McCullough et al. (2014), natural selection facilitated the development of reconciliatory gestures because interpersonal relationships are often necessary for our survival.

When You Need More Than an Apology

If you find yourself on the wrong side of a dispute, try to keep your chin up and seek forgiveness. Apologies do work, but be mindful that how you apologize also matters and sometimes an apology is not enough to repair a relationship. Sometimes the relationship needs work to thrive.

Couples counseling, individual therapy, and family therapy are all useful tools for people experiencing difficulties forgiving and moving beyond a fight. Therapy can give you an opportunity to analyze both the fight and the way you fight in order to develop better strategies for communicating your emotions. If you need help, try seeking out a qualified therapist to work on a relationship you value and want to keep.