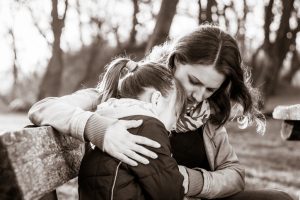 Enmeshment, a family dynamic that can be described as blurred boundaries between members, can make it difficult or impossible for a child to develop an individual sense of self because they are overly concerned about others. Family therapist Salvadore Minuchin brought this concept to light in the 1970s, and the topic has become common in psychological discussion of late. But what exactly constitutes enmeshment? How does it develop? And how can it be addressed?

Typically the roots of enmeshment can be traced back to parents who over-identify with a child, a dynamic often passed down through generations. Within this dynamic, boundaries are blurred—and may even be viewed as undesirable—and the parent may regard the child as an extension of the parent, rather than their own person, and treat them accordingly.

As a result, children of enmeshed family systems often develop emotional ties that elicit confusion, and they may fail to develop autonomy. An underdeveloped sense of autonomy may make it difficult for the child to act on desires that differ from the parent’s or lead a child to feel guilty when attempting to act on their own feelings. The enmeshed parent may also take it personally when a child attempts to demonstrate autonomy or independence, which can have a harmful impact on the child and the family dynamic overall.

Enmeshment between a parent and child makes it difficult for the emotions of the child to be separated from the emotions of the parent. It can be said, then, that a child may take on emotional pain the parent carries from enmeshment in their own family of origin. This is not uncommon and is often done unconsciously—a child does not realize they are taking on the parent’s emotional pain or that it is not theirs to carry.

Another way of looking at it is to think in terms of “absorbing” the emotional pain of the parent. A parent who is projecting emotional pain is likely not consciously aware they are doing it but simply repeating the cycle that played out in their childhood.

To avoid becoming enmeshed with their children, parents must have their own sense of purpose in life, their own hobbies and passions separate from their children. A parent’s self-worth cannot rely a child’s behavior or accomplishments.

To avoid becoming enmeshed with their children, parents must have their own sense of purpose in life, their own hobbies and passions separate from their children. A parent’s self-worth cannot rely a child’s behavior or accomplishments. When one’s self-worth is defined by the actions or choices of one’s child, the pressure on the child to perform, to fulfill expectations, becomes heavy and burdensome. A parent’s self-worth is not the child’s responsibility, and children who take on this charge, consciously or unconsciously, often fail to develop self-esteem and/or a sense of personal identity.

Children generally rely on their parents for support. But before a child can expect to receive this support, they generally need to know the parent is emotionally strong and that the parent will support the child as they are, not only as who the parent wants them to be. When a child is secure in this knowledge, they will typically feel free to be themselves and to follow their own passions without feeling responsible for a parent’s emotional pain or disappointment.

In families affected by enmeshment, children may avoid seeking help when they experience difficulty or dilemma in life, fearing that the parent will impose their own agenda rather than offer guidance and support. When parents model good self-care habits, appropriate boundaries, and regulated emotions, on the other hand, children are more likely to desire to spend time with them, as opposed to when a child simply feels obligated to take care of their parent or manage their parent’s emotions. (Experiencing difficulty with dysregulated emotions? A therapist can help.)

What can parents do to address enmeshment? Seek the help of a qualified family therapist or counselor if you recognize any of the following signs in your parent-child dynamic:

What can an older child or adult child do to remedy the impact of an enmeshed relationship with a parent?

Children in enmeshed families may view the parent-child relationship as an obligation or burden and, when they reach adulthood, seek out relationships that perpetuate this dynamic. Parents who take responsibility for their own self-worth and emotional pain, however, are likely to have healthier relationships with their children, where the children make the choice to be involved in their parents’ lives and are able to establish their own healthy, independent relationships.