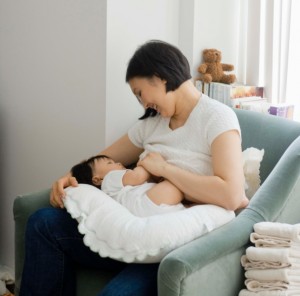 Oxytocin, a chemical messenger within the body, functions as both a neurotransmitter and a hormone in mammals. It plays an active role in social bonding, social memory, love and intimacy, sexual reproduction, and maternal functions before, during, and after childbirth.

Oxytocin may be chemically classified as a nonapeptide, as it contains nine amino acyl residues, but biologically it is classified as a neuropeptide, due to its role in neuronal signaling. When acting as a neurotransmitter, oxytocin is released directly into the brain and spinal cord, where it bonds with oxytocin receptors to facilitate communication between neurons. When acting as a hormone, oxytocin is transported to, stored in, and secreted by the posterior pituitary gland.

The Function of Oxytocin

Oxytocin plays a significant role in several key areas of human life. Its importance in social connection is highlighted by the fact that it is secreted when humans touch, hug, or experience orgasm. Oxytocin release is linked with sexual arousal, and as a result, a romantic couple’s oxytocin levels may be particularly high during the first six months of dating.

Oxytocin also plays a major role in maternal physiology, psychology, and behavior. During childbirth, the widening of the cervix and vagina triggers the release of the hormone, which in turn increases the contractions of the uterus. Oxytocin is a vital component in lactation, as stimulation of the nipples prompts secretion of the hormone and facilitates milk let down. Several studies have linked oxytocin to the formation of strong maternal bonds.

Due to its many roles and functions, oxytocin has been given many names by researchers and the general public. In addition to being called the love hormone, it has also been dubbed the moral molecule, the bliss hormone, the cuddle chemical, the trust hormone, and the hug hormone.

Oxytocin is considered to be important for healthy stress regulation, social cognition, and social attachment, and some mental health professionals believe the hormone may be an effective treatment for many psychiatric symptoms, as mental health issues might often stem from disruption in stress regulation or social processing systems.

Currently, studies are being conducted to determine whether oxytocin treatment may be of benefit to those diagnosed with:

Findings show that oxytocin treatment may decrease trust and prosocial behavior in those with borderline personality and may increase sadness in mothers experiencing postpartum depression. The general results do indicate an improvement in stress response and emotion recognition, however.

Although the results of a single administration of oxytocin may differ from those gained from a long-term treatment program, these preliminary findings do indicate that oxytocin may be an effective treatment tool for several mental health conditions.

Health care professionals have developed several health-promoting applications of oxytocin in the medical field. During childbirth, doctors may use the hormone to initiate labor, strengthen contractions, and reduce blood loss after delivery. It is particularly useful for inducing labor in women affected by gestational diabetes and preeclampsia. Oxytocin may also used to treat incomplete abortion or miscarriage.

In these situations the drug is usually administered via an injection to a large muscle (buttock or hip) or added to an intravenous fluid which is slowly fed into a vein by means of a needle or a catheter.  Synthetic oxytocin under the brand names Pitocin and Syntocinon are currently not on the market; however, generic oxytocin is available.