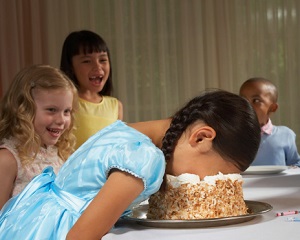 Schadenfreude is pleasure or amusement in response to the misfortunes, pain, humiliation, or mistakes of other people.

Schadenfreude is a German word with no precise English equivalent. Most people experience schadenfreude from time to time; the feeling tends to occur when someone a person dislikes is threatened or experiences a setback. For example, a student might secretly delight when his or her biggest classroom competitor fails a test, and a person might take pleasure in their ex-spouse’s relationship difficulties.

Some slapstick comedies also utilize schadenfreude by encouraging an audience to laugh at others’ injuries or humiliations. In other cases, schadenfreude can serve as misplaced empathy. We all recognize the embarrassing nature of a public fall or saying something silly, and sometimes seeing that other people make the same mistakes we do can cause some joy.

While some degree of schadenfreude is part of the normal continuum of human experience, frequent schadenfreude can indicate a mental health condition. People with personality diagnoses such as antisocial personality may delight in the pain of others and have little regard for others’ well-being. Chronic anxiety, depression, or low self-esteem might also cause someone to seek validation in others’ failures. Some mental health professionals differentiate between glee at minor misfortunes—such as slipping on a banana peel or making a stupid remark—and glee at more serious suffering such as terminal illness or the death of a child.