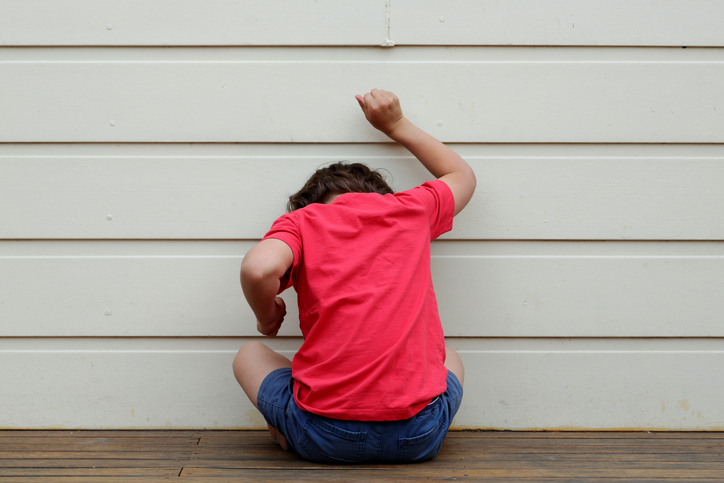 Disruptive mood dysregulation disorder (DMDD), a condition that typically begins in childhood, is characterized by severe, recurrent temper outbursts and a persistent irritable or angry mood. This diagnosis, introduced in the latest version of the Diagnostic and Statistical Manual of Mental Disorders (DSM-5) in 2013, is fairly new.

What Is Disruptive Mood Dysregulation?

Disriptive mood dysregulation is more than moodiness, involving significant mood symptoms that require clinical attention, including extreme irritability and tantrums that interfere with a child’s ability to function. The symptoms of DMDD typically appear before age 10, but cannot be diagnosed prior to age 6 or after age 18.

Children with DMDD exhibit temper outbursts often caused by feelings of frustration. These feelings are expressed either verbally through yelling or cursing, or behaviorally, which could mean aggression against property, themselves, or others. Between these outbursts, those affected by DMDD typically maintain an irritable and angry mood throughout the day that may be noticeable to others.

Who Is Affected by DMDD?

This diagnosis is only given to children ages 6 to 18. The prevalence of DMDD among the general population is unknown, though the diagnosis can be common among children taken to pediatric mental health clinics. DMDD is more common among males than females, and among elementary school-aged children as opposed to adolescents.

Disruptive Mood Dysregulation in the DSM-5

To be diagnosed with DMDD, a child must meet the following diagnostic criteria:

It is important make sure the symptoms do not occur solely in the context of other mental health issues, such as depression, autism, or posttraumatic stress (PTSD), and are not attributable to a substance use issue or other medical or neurological condition.

When diagnosing disruptive mood dysregulation, it is important for mental health professionals to rule out that the symptoms are not caused by conditions that appear similar, specifically bipolar and oppositional defiant disorder (ODD). Both DMDD and bipolar are characterized by a significant mood disturbance, but the crucial distinction between the two are the timelines on which they occur. In children with bipolar, manic moods are distinct periods of mood change that differ from the child’s typical mood and presentation. In DMDD, the mood issue persists over the span of many months. Additionally, bipolar typically involves the presence of an elevated mood and grandiose thinking, both symptoms not found in children with DMDD.

ODD is characterized by the presence of an angry or irritable mood, argumentative or defiant behavior, and vindictiveness. Most children with DMDD will also meet criteria for a diagnosis of ODD, though in these cases, only DMDD should be diagnosed. The key difference between DMDD and ODD is that the severity and frequency of outbursts is more severe in DMDD.

Many children who are diagnosed with disruptive mood dysregulation have an extensive history of chronic irritability. They may have been diagnosed with, or met the criteria for a diagnosis of, ODD. Additionally, they may have previously shown signs of difficulties with information processing and attention. Researchers are studying potential genetic risk factors and brain mechanisms associated with DMDD.

Because disruptive mood dysregulation is a new diagnosis, treatment options are still being researched and developed. Currently, the most common treatments are those that have been found effective for other conditions with symptoms of irritability and tantrums. These treatments include medications and therapeutic interventions.

Medications used in the treatment of DMDD include stimulants, like those used in the treatment of attention-deficit and hyperactivity (ADHD), antidepressants, and atypical antipsychotics. There is some evidence that stimulants can be effective in decreasing irritability, while antidepressants target both irritability and other mood issues. However, antidepressants have been found to increase suicidality in some children and teens, making it important to closely monitor individuals using these medications. Atypical antipsychotics have been useful for decreasing temper outbursts involving physical aggression.

Therapeutic interventions can also be helpful. Cognitive behavioral therapy (CBT) can teach those with DMDD how to deal with thoughts and feelings that contribute to outbursts and mood issues. Therapists can also teach children skills to help them regulate their moods more effectively and increase their ability to tolerate frustration. Parent training is another type of therapy that can be helpful in the treatment of DMDD. In training, parents learn how to respond to irritable behavior in a way that reduces a child’s aggression, act consistently and predictablely, and reward the child’s positive behaviors.