Gregory Bateson was an anthropologist, linguist, and social scientist who applied systems theory to the social sciences and identified the paradox of the double bind.

Gregory Bateson was born on May 9, 1904, in Grantchester, England. He studied at the Charterhouse School and went on to receive a bachelor’s in biology from St. John’s College. He remained at Cambridge, continuing his studies at St. John’s and, in 1929, took a position teaching linguistics in Australia at the University of Sydney. He also spent some time in the Pacific region exploring his fascination with anthropology.

Bateson married famed anthropologist Margaret Mead in 1936 and moved to California shortly thereafter. After Bateson and Mead divorced in 1950, he married two more times—first to Elizabeth Sumner and then to therapist Lois Cammack. He had two daughters and one son.

While practicing anthropology in California, Bateson met Jay Haley and several other colleagues who joined him in his famous Bateson Project. The project became the springboard for Bateson’s double bind theory.

Bateson became an American citizen in 1956 and remained in the United States for the rest of his life. He spent the remainder of his career lecturing, teaching, and researching. He worked at Saybrook University (formerly the Humanistic Psychology Institute) in San Francisco and at the University of California, Santa Cruz. He was a member of several prestigious professional associations and was a fellow of the American Academy of Arts and Sciences.

Early in his career, Bateson wrote about the ways in which communication and behavior are circular and affect one another. There's not always a clear cause or effect of a behavior. For example, a person in a performance may alter her performance based upon audience feedback, and this may continue to alter the feedback. Influence is multidirectional, and Bateson referred to this phenomenon as the “vicious circle.”

Bateson is well known for identifying and naming the paradox of the double bind, a dilemma that Bateson and his colleagues discovered while researching schizophrenia. A double bind occurs when an individual experiences conflicting emotional, verbal, or physical messages. They realized that these highly emotionally impaired individuals often suffered from an inability to process the internal and external communication they were receiving.

The deliberate use of double bind scenarios can be used as a form of thought control. With no clear verbal communication, implications can be made through intonation, eye contact, physical gestures, and by other methods. Victims of double bind intimidation often feel trapped in a situation that requires they complete a specific task that may result in a positive outcome in one regard, and a negative outcome in another. For instance, when a person who is abused is told that he or she is loved and valued while simultaneously receiving the message that he or she will no longer be loved if he or she tells anyone about the abuse, the victim is in a double bind.

The double bind technique is used as a method of coercion and control in relationships of nearly every type. The authority figure, whether a parent, teacher, or intimate partner, uses the tactic to gain power over the victim in the relationship. The victim, unable to come to any resolution when confronted with the double bind, experiences anxiety and fear. As hard as the victim may try, he or she is not able to satisfy all requirements of the double bind, as it is an impossible puzzle. This can leave a person feeling powerless, intimidated, unfulfilled, and afraid of the consequences that will follow.

Bateson was intensely fascinated by the interplay of various symptoms, and he claimed that the world was a group of systems interacting with one another. The system of the individual, the culture, and the ecosystem each respond to one another, creating a feedback loop.

Bateson argued for a type of scientific inquiry called abduction, which is the process of comparing patterns of relationships. Philosopher Charles Sanders Pierce originally used the term to indicate the way in which scientific hypotheses are created. 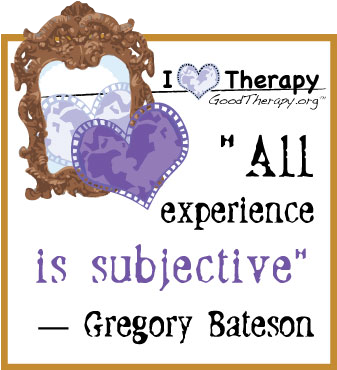