Anna Freud was an early 20th century psychologist. The daughter of Sigmund Freud, she expanded upon his work and is considered one of the founders of child psychoanalysis.

Anna Freud was born in Vienna on December 3, 1895, the youngest of six children born to Sigmund Freud and his wife, Martha. Throughout her childhood, Freud remained distant from her five siblings and especially from her sister Sophie, with whom she rivaled for her father’s attention. Many summers, Freud’s parents sent her away to health camps in order to help her overcome health problems, which may have included depression and chronic eating disorders. Freud was not close to her mother, preferring her nurse instead. She was, however, close to her famous father.

After finishing high school and training to become a teacher, Freud traveled to Italy to stay with her grandmother and to England by herself. In 1914, she began teaching at the Cottage Lyceum, the grammar school she attended as a child.

Anna Freud’s interest in psychoanalysis was piqued when her father began to analyze her in 1918. In 1922, Freud presented the totality of this analysis to the Vienna Psychoanalytic Society in a paper entitled "The Relation of Beating Fantasies to a Daydream." She became a member of the society shortly thereafter and began working with children in private practice. Within two years, she was offered a teaching position at the Vienna Psychoanalytic Training Institute. In 1927, Freud accepted a position with the International Psychoanalytical Association as Secretary, and in 1935, she took over as director of the Vienna Psychoanalytical Training Institute. The following year Freud published The Ego and the Mechanisms of Defense, a book that laid the groundwork for the field of ego psychology and defined Freud as an innovative thinker.

Freud and her family fled Austria and emigrated to England in 1938 due to the Nazi invasion. She founded The Hampstead War Nursery, an institution that provided foster care and encouraged attachment and bonding for the youngest victims of the war. Eventually, Freud published her observations of how stress affected children and the importance of creating foster attachments for children whose parents were unavailable in the book Normality and Pathology in Childhood. The institute began to offer courses in 1947, and a clinic was built to offer services to children with psychological needs.

Freud spent the latter part of her life lecturing and traveled to the United States several times. She visited Yale Law School and conducted courses on crime and its effect on family relationships. This area of interest provided her with the opportunity to work with Albert Solnit and Joseph Goldstein, and the three published their collaborations in Beyond the Best Interests of the Child in 1973. Freud died in 1982.

Freud discovered that children often required different psychological treatment from adults and emphasized the role that early disruptions in attachment could play in the subsequent development of psychological problems. Her work studying children who had experienced abandonment or extreme neglect laid the foundation for later research into early attachments. 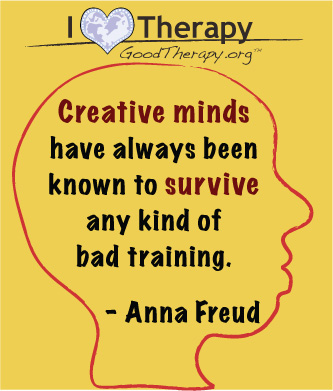