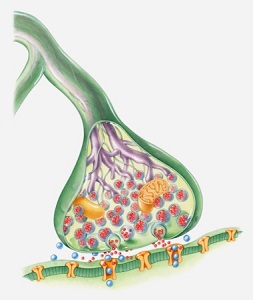 A synapse is the point at which a neuron sends signals to another neuron, and consists of a tiny gap between the two neurons.

Synapses and the Structure of Neurons

Neurons are the cells of the nervous system that enable the body to convey signals to and from the brain and spinal cord. Synapses are the portions of neurons that enable them to carry messages to another neuron. When a neuron sends a signal to another neuron, neurotransmitters are released. These chemical messengers carry messages from the presynaptic neuron—the neuron sending the signal—to the postsynaptic neuron, the neuron receiving the signal. Synapses occur immediately after dendrites—tiny protrusions from the neuron that extend the size and reach of the neuron. Dendrites function both to send information to other neurons and to receive information and transmit it to the neuron’s cell body.

Synaptic rearrangement occurs when some neuronal synapses are lost and others are established. This process is an important part of brain development, and often occurs with children under two when they undergo neural pruning—the removal of neural connections that are not used and the strengthening of frequently used neural connections.

Synaptic rearrangement can also happen as a result of an injury or disease. When bodily injuries interfere with neural pathways or alter sensations, synapses may be lost. The body may establish new synapses to compensate for the lost ones. Damage to neurons caused by drug use, infection, or chronic illnesses may cause synaptic rearrangement that merely results in the loss of some synapses without the strengthening or adding of others.