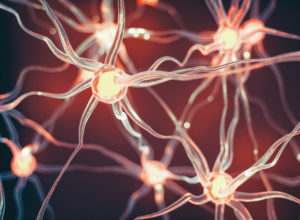 Neurons are brain cells that communicate by sending chemicals back and forth. These chemicals, called neurotransmitters, travel between neurons through points called synapses. Neurons will form new connections with each other as a child grows, learns, or reacts to their environment. All our knowledge, memories, abilities, habits, and more are written into this network of neurons.

When a person is born, their brains are constantly building new neurons. These cells make an incredible amount of connections as they grow. By the time the person is a toddler, they will have about twice as many as a person will need as an adult.

During childhood, the person’s environment will stimulate their brain, reinforcing certain connections. For example, when a child is taught how to draw, the neurons responsible for fine motor control will develop synapses. As a child practices drawing, the neural connections for that skill will become denser and more entrenched.

During adolescence, the brain eliminates neural connections that are no longer being used. This process is called synaptic pruning. When unused synapses disappear, the brain can then focus its resources on making more synapses for important functions that are used on a regular basis.

Synaptic pruning helps explain why it is easier to learn some concepts at younger ages (such as a second language), as the neural pathways are easier to establish. Yet the brain continues to develop and rewire itself throughout life. New experiences can significantly change the brain’s structure and functioning at any age.

However, as an individual grows older, they will have less brain plasticity overall. Changes in the brain may happen more slowly and be less profound. Elderly brains can still learn and grow, but it will be at a gentler pace than before.

Some brains aren’t able to do everything that other brains can. Disabilities could be present at birth, such as when a child is born blind. A person could also lose functioning after a stroke or brain injury.

When a part of the brain is damaged or impaired, neuroplasticity can help the it work around the issue. Here are some strategies a brain can use:

If part of a person’s brain is damaged in early life, the brain can “shift” this function to a similar part of the brain. For example, say a child damaged their right parietal lobe, which helps them know their body’s position in space. The brain may reassign this skill to the matching left parietal lobe. This will allow the child to physically navigate their environment despite the brain damage.

Yet there is a significant drawback to this strategy. Reassigning tasks can crowd out the neural architecture for other skills. The left parietal lobe typically controls math knowledge (among other things). If the neural connections for math are overwritten, then the child may have trouble understanding certain math concepts.

2) Develop Another Way to Do the Task

Sometimes a brain function can’t be relocated. However, neurons can be rearranged to compensate for that lost brain function. A person solve a problem by using different skills, “masking” their loss of a particular function.

For example, if a person struggles to tell faces apart, they may have trouble recognizing friends and family. To fix the issue, their brain may learn how to distinguish between individual voices, allowing the person to recognize loved ones as soon as they talk.

Sensory cortices are the parts of the brain responsible for senses such as sight or touch. These cortices process data in a similar “language.” When one cortex doesn’t get information from its matching sense, the brain may feed it data from other senses instead.

For example, a person who is blind from birth will not get any sensory input from their eyes. Rather than let the visual cortex go to waste, the brain can use the sense of touch to “translate” information. So rather than using light to create a representation of their environment, a blind person can use touch to read Braille or navigate a room. In such a case, both a person’s somatosensory cortex and their visual cortex will process tactile information.

In most cases, the longer a cortex has been deprived of input, the better the brain will be a translating sensory information. A person who has been deaf all their lives will be able to reroute sensory data better than an adult who recently damaged their ears in an accident.

Neuroplasticity is a key element of mental health counseling. When people in therapy learn new coping skills, they are literally building the neural connections that promote resilience. As people learn new habits, their new synapses will replace the connections that prompted unhealthy behaviors and cognitive distortions.

In some cases, improving neuroplasticity can itself be part of mental health treatment. Brains in the early stages of dementia often use neuroplasticity to compensate for cognitive decline. Aerobic exercise and cognitively challenging activities can increase a brain’s overall neuroplasticity. Research shows that people with dementia who do these activities can delay the progression of symptoms. If interventions are done early enough, they can offer considerable (albeit temporary) benefits.