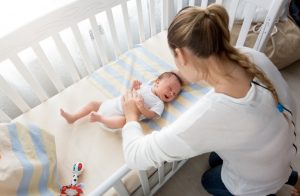 Postpartum psychosis is a rare but serious condition characterized by the presence of psychotic symptoms, such as hallucinations, delusions, and paranoia, in a person who has recently given birth. Because postpartum psychosis can lead to dangerous thoughts and behaviors, it warrants immediate medical attention.

Unlike postpartum depression and other perinatal mood conditions, which develop in an estimated 20% of new mothers, postpartum psychosis is rare. It occurs after only 1 to 2 of every 1,000 deliveries (or 0.1-0.2%). Postpartum psychosis typically develops quickly, usually within the first two weeks after delivery. Perinatal mood conditions such as postpartum depression or anxiety often develop within the first four weeks after delivery, but they can develop any time in the year following childbirth.

The exact cause of postpartum psychosis is not known, but is it believed to be related to the significant hormone changes experienced by pregnant individuals just before, during, and immediately following childbirth. Genetics are also thought to play a significant role in the development of this condition, and disrupted sleep patterns may be a contributing factor, as well.

How to Recognize Postpartum Psychosis

The symptoms of postpartum psychosis typically include hallucinations and delusions, sleep disturbances, paranoid thoughts, confusion, disorientation, irritability, mood swings, and possible attempts to harm oneself or the baby. The delusions experienced may vary widely, and some may contain violent commands, beliefs about the baby, or other unrealistic thoughts that represent a break from reality. Thoughts commonly experienced in postpartum psychosis include the belief that the newborn is evil or needs to be protected from evil.

Why Is Postpartum Psychosis So Serious?

Though postpartum psychosis is both a temporary and treatable condition, it is extremely serious because of the associated mortality rate. Most women who experience postpartum psychosis do not harm themselves or anyone else, but immediate treatment is important to ensure the safety of the family.

The lack of understanding about postpartum psychosis, in conjunction with its rarity, means that the diagnosis can often be missed by medical professionals. Those who have experienced bipolar or psychotic symptoms prior to pregnancy should be aware of their increased risk for developing this condition. Another factor that contributes to the severity of postpartum psychosis is the reluctance of some medical professionals to prescribe lithium, the medication commonly used to treat it, to those who are breastfeeding. However, the risk of the medication is typically less serious than the risk of postpartum psychosis that goes untreated. Further, a study following a number of infants who had been breastfed by individuals taking lithium noted no adverse effects as a result of the medication.

Medical and mental health professionals emphasize that it is essential for those who are experiencing any signs or symptoms of postpartum psychosis to seek immediate medical attention. The primary treatment for this condition is antipsychotic and mood-stabilizing medication, most often lithium. Some of these medications may impact the ability to breastfeed a child or provide expressed milk, but a doctor can provide information about how any medications will affect a one’s ability to breastfeed.

Those who experience postpartum psychosis may be hospitalized and monitored closely until the condition has been resolved. However, few psychiatric hospitals in the United States provide mother-baby units, which make it difficult, perhaps even impossible, for a person admitted to provide care, especially when newborn visitation is prohibited, which is often the case.

Some may feel it was somehow their fault the condition developed. Therapy may be helpful in addressing lingering feelings of self-doubt, guilt, or general distress about the experience.