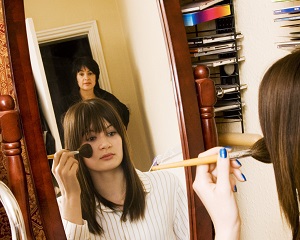 Introjection, one of many defense mechanisms posited by Sigmund Freud, occurs when a person internalizes the ideas or voices of other people. This behavior is commonly associated with the internalization of external authority, particularly that of parents.

Introjection is the opposite of projection. Projection occurs when a person projects feelings or characteristics onto another person. Introjection, which is common among children and parents, occurs when a person internalizes the beliefs of other people. A child might take on elements of parents’ personalities or beliefs by adopting their political ideology, concept of right and wrong, or ideas about sex. When people introject, they identify with a person or object so strongly that they cannot separate that person or object from themselves.

While everyone learns from the external world and takes on elements of other people’s beliefs and ideas, introjection occurs with minimal thought. A woman who adopts her friends’ views, after they have been carefully explained and considered, is not introjecting, but a child who reflexively adopts a parent’s views without thought can be said to be introjecting.

Introjections involve attitudes, behaviors, emotions, and perceptions that are usually obtained from influential or authoritative people in one’s life. They are neither digested nor analyzed; they are simply adopted as a part of one’s personality as concepts that one considers should be believed or behaviors that one thinks ought to be followed. Introjections do not involve an individual’s personal integrity or morality.

How the Environment Affects Introjection

A person may absorb the characteristics or attitudes of subjects in the immediate surroundings. While caregivers are usually the first people whose attitudes a young child may adopt, the moral code and behaviors of teachers and peers may also significantly influence a child’s value system. These influences may conflict with the values that caregivers wish to promote, and they may be particularly strong in the period before the child learns to self-govern and develop individual beliefs and personality. For example, a boy who is usually cheerful at home may begin to kick his dog and pick on his younger sister after experiencing bullying at school.

Introjection as a Defense Mechanism

Freud characterized introjection as a mature defense mechanism that is commonly used by psychologically healthy people. Some mental health professionals believe that introjection is a protective strategy that children employ in order to cope with unavailable parents or guardians: By unconsciously absorbing the characteristics of parents, children reassure themselves that some aspect of the parent is present even if the parent is physically absent. Depending on the types of attitudes that are picked up, introjection may lead to positive or negative effects.

A person may introject positive traits and beliefs such as compassion, loyalty, morality, or a desire to help the poor. Introjection may also help an individual to cope with separation or even the loss of loved ones. For example, exclamations that a daughter says something “just like her mother,” following the death of the mother, may elicit vivid, happy memories. Introjection may also foster a sense of responsibility if an inexperienced youth is determined to do things “just like Dad.”

Introjections may also have negative connotations. A child exposed to negative parenting may constantly feel worthless, incompetent, or guilty, feel unable to freely express emotion, and find it difficult to discover identity or a sense of self. With this obstacle to self-development in place, a child may begin to lose confidence and may also become self-critical.

Introjection may lead individuals to pay an inordinate amount of attention to the beliefs of others rather than their own personal needs.Another negative effect of introjection is the internal conflict that may arise from attempts to reconcile different or incongruous concepts. For example, a child who idolizes and copies the “ideal” father may experience inner turmoil upon discovery that the father was involved in criminal activity. An individual may also experience internal conflict if, deep down, that person does not truly agree with the attitudes adopted from other individuals.

Introjection may lead individuals to pay an inordinate amount of attention to the beliefs of others rather than their own personal needs. Some teenagers may focus entirely on upholding parental beliefs and fulfilling expectations rather than making their own decisions about the future. A person in a relationship may internalize the other partner’s comments about appearance and behavior and begin to act in that manner.

Negative introjection can also be part of a cycle of abuse. A person in an abusive relationship, for example, might begin to believe the claims of a partner who is abusive and internalize feelings of worthlessness or failure. In some cases, the victim might introject the abuser’s personality so strongly that the victim then becomes an abuser. The support of a therapist or other mental health professional may help mitigate the effects of abuse and prevent this from happening.

It is possible for a person to overcome negative internalizations with therapy. Psychoanalysis may be used to uncover and resolve deep-seated unconscious material, even when it has been buried since childhood. Therapists may also employ cognitive behavioral therapy to help people analyze negative beliefs and gradually replace these beliefs with more realistic and accurate thoughts.

Negative introjections may contribute to mental health conditions such as depression and anxiety. When this is the case, therapy may also be helpful in addressing and treating these conditions. With the help of a mental health professional, a person may often be able to address and resolve the effects that negative introjections have had and develop strategies to avoid being further affected in the future.