The Lies We Tell When We Are Depressed 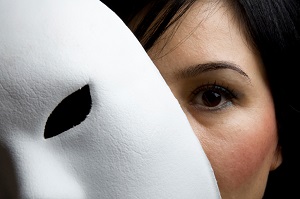 Even the most honest people are faced with lying when they are depressed. This is yet another indignity adding to the suffering of depression. The most obvious and pervasive example is the frequent, daily question, “How are you?” It is a social convention to greet friends, strangers, and acquaintances with this question. Frankly, most of us lie in response to this question, or at least shade or limit the truth, because people generally don’t want to hear the true answer when they ask. Convention tells us to answer, “I’m fine, thanks; how are you?” For most people most of the time, this isn’t a big deal. It’s just a formality that facilitates greeting people, and is understood as a friendly hello. It’s not generally a problem because mostly people are fine, and don’t need to tell someone about the rash on their butt or the dog poo they stepped in.

But for a depressed person, the lies required for social convention are constant, and they create more and more isolation and separateness from other people. They reinforce a sense of having a shameful secret that no one wants to know or help them resolve. It reinforces a sense of being a burden or unlovable. All of these thoughts are common in depression, and to have them reinforced all day long by multiple people is crushing. Many people deal with it by isolating themselves from others if they can.

Of course, we all expect to lie to store clerks and other strangers, or even coworkers or neighbors, when they ask how we are and the truthful answer is too personal. But what about when a doctor asks—or clergy, someone we’re dating, our parents, our children, or our friends? What if what we are thinking is, “I hate myself,” “I’m disgusting,” “I’m a failure,” “Everyone would be better off if I were dead,” “I can’t stand the emotional pain anymore,” or even “Day after day I can barely get out of bed, and when I do, I can’t do anything—I’m neglecting my children and spouse, doing a terrible job at work, and have no interest or joy in anything”?

If people say these thoughts aloud, they are likely to get an upsetting response. Some will tell them they don’t really feel that way, or shouldn’t feel that way. Some will try to cheer them up. Others will shame or blame them for how they suffer. Many will get scared; some may laugh. Some will distance themselves. Even some inexperienced therapists may get distracted by their fear of suicide and shift focus to keeping the person alive rather than addressing the pain. Good friends may listen and care, but if the condition is chronic, they get tired of listening to the same scary, depressing point of view that is their friend’s experience.

Here’s an example of the kind of conversation depressed people have all the time, in this case between friends. The italics indicate unspoken thoughts.

Depressed person: I feel like crap, but if I say that, she’ll think I’m being negative and tease me about being Eeyore. I don’t want to alienate her or make her depressed, and I also don’t want to answer a lot of questions to explain or justify how I feel. I’d better act like I’m OK. Maybe she won’t notice. “I’m fine, how are you?”

Friend: She doesn’t look good, but I don’t want to pry, and I don’t know what to do if I find out she’s not OK, so I’ll just wait for her to tell me what’s wrong. Exercise would probably help her—maybe I can inspire her. “I’m good—just had a great workout.”

Depressed person: Oh, god, she thinks I’m a fat slug. I don’t have the energy to brush my teeth, much less work out. I’m a worthless piece of crap. I’ll never be a normal person like her. Everyone else just goes on with their lives, and everything would go on the same way without me. I’m really not a participant in life; I’m just dead weight. “Wow, that’s awesome. I have to get back to the gym, too. How’re the kids?”

Friend: If I entertain her with stories, maybe it will cheer her up …

Depressed person (tuning in and out of stories): I’ve told her how crappy I felt—or some of it—both times I’ve seen her recently. If she knows I’m still depressed, she’ll probably be bored and overwhelmed and won’t want to see me again until I feel better. Maybe I can just talk about one problem. “Yeah, I really worry about my kids. Henry punched a kid at school the other day …”

The depressed person walks away from the visit feeling alone in her secret life and drained from keeping the secret.

This is one of the most important reasons to find an experienced, qualified depression therapist when depression lasts longer than a few weeks. It’s essential to be able to tell someone the whole truth about how much you’re suffering, without concern that the person will discount you, disbelieve, judge, get distracted by fear about what you are saying, or respond with boredom, irritation, or impatience. As obvious as that may sound, not many people can do this for others.