Conflict and the Thinker/Feeler Struggle in Relationships 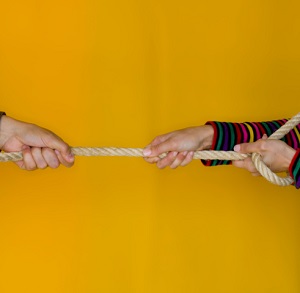 The thinking/feeling dichotomy was first connected to individual differences in psychological types (personalities) by Carl Jung. It is used in the Myers-Briggs Type Indicator’s personality typology and addresses natural differences in how individuals make decisions and experience emotions.

It is also the cause of a great deal of tension and conflict for couples that naturally differ on this dichotomy.

These terms are used to address fundamental differences in the perceptual and experiential processes automatically triggered when thinking- and feeling-response-oriented individuals are sorting out and expressing what they are thinking and feeling. (Please note that this interpretation differs significantly from those of Carl Jung and the authors of the Myers-Briggs Type Indicator.)

Although human beings are aware that people differ in how they come to conclusions and experience and express emotions, few understand that these differences in self-expression are driven by innately different perceptual and experiential frames of reference. Of particular note is a fundamental difference in the experience of emotions when conflicts arise—a difference of such magnitude that role-reversal comprehension is not possible. These differences are a constant in interactions between thinking and feeling individuals, easily confirmed by observation of one’s personal and professional relationships.

Those with thinking response orientation:

Those with feeling response orientation:

The usual cause of difficulty for couples that differ on this dichotomy comes from a fundamental difference in how they experience and express emotions. The moment harmony is disrupted, most feeling-response-oriented individuals feel bad, as if they have done something wrong. Knowing they have not, in fact, done something wrong does not usually help. They feel bad anyway.

When these feelings are triggered, they may immediately apologize, hoping to restore harmony and neutralize the guilt they are experiencing, or they may get upset with their partner for doing something that caused them to feel that way. Neither of these responses makes much sense to a thinking-response-oriented individual.

Why would a person feel guilty and bad simply because someone disagreed with them; much less suggest that the other is at fault for causing them to feel that way? From the thinking-oriented perspective these responses do not make logical sense and are therefore invalid.

Choice is not an option here. Very much like the degree to which someone is left-handed, right-handed, or ambidextrous, the manner in which feeling- and thinking-oriented individuals experience and express thoughts and feelings is natural and normal—just different.

The Challenge in Communication

In essence, two naturally disparate perceptual frames of reference for making sense out of the same reality have been activated. The feeling partner seeks validation for how they are feeling about the situation, while the thinking partner seeks validation for why they think their partner’s feelings do not make logical sense. Neither can provide a response that meets the other’s criterion for being heard.

Without intention or awareness, the explanations that each provide for justifying their own natural and normal responses de facto invalidate the natural and normal responses of their partner. Issues of little import can trigger emotionally charged exchanges that leave both parties psychologically battered, blaming each other for the damage done, while the issues themselves remain unresolved. The conflict resolution challenge is significantly magnified when the couple also differs on the extroversion-introversion dichotomy.

In fact, the accuracy of the information above is such that most thinking-response-oriented partners have been able to accept its validity. Feeling-response-oriented partners have usually been more ambivalent. Although the information provides concrete validation regarding their emotional sensitivity and reactivity, it does not provide them with much relief from the feelings that get triggered when conflicts arise.

If they accept the premise that natural and normal differences in response orientations are at play, they have to acknowledge that their partner

The inequity inherent to this difference in experiencing emotion is such that some feeling-response-oriented partners have great difficulty accepting it. Fortunately, once most thinking-oriented partners have a logical explanation for their partner’s feel-based responses, they have been able to soften their responses in general and become more considerate and accommodating when conflicts arise. This change has helped many feeling partners contain the resentment they automatically experience during conflict.

The intensity of the explosive exchanges that some thinking/feeling couples are dealing with is such that adherence to a timeout rule is an absolute necessity if they hope to replace their destructive conflict resolution process with a healthier one. It is understandable why some feeling-response-oriented partners have a hard time adhering to this time out rule. After all, extroverted/feeling-oriented individuals have a particularly difficult time letting go before their partner has acknowledged the validity of how they are feeling.

The fact remains that once an issue has become emotionally charged and abusive, the possibility of a meaningful resolution no longer exists. Partners with strong extroversion, intuition, and feeling-response orientations may have a particularly difficult time accommodating this timeout rule.

The level of psychic distress (disruption of self) that some experience is so extreme that efforts by their partner to withdraw may trigger desperate, even violent behaviors to prevent their partner’s exit before a resettling response has been provided. However, a way must be found to contain these emotions if they hope to replace their destructive process with a healthier one.

Consequently, depending on the perceived volatility of the conflicted exchange, the person calling for a timeout may:

The timeout is almost always called for by the thinking partner and resented by the feeling partner.

Tip for thinkers: Seek to understand and accommodate your partner’s areas of sensitivity rather than attempt to help them understand why they should not feel that way.

Tip for feelers: Use logic-based constructs when explaining why they are upset. Example: “Even though you do not understand why I get upset when you say that, the fact remains that every time you say that I get upset. Given the predictability of my response, why do you keep saying that?”

Once most couples realize that natural differences are at play, and that neither is intentionally responding the way they do in order to get his or her own way, they are able to accommodate and compromise in areas that had not been possible before.