Wilhelm Reich was an early 20th century psychoanalyst known for his controversial and often radical ideas.

Wilhelm Reich was born March 27, 1897, in Dobrzcynica, Galicia, which was once part of the Austro-Hungarian Empire. Reich grew up on a cattle farm run by his father in a region known as Bukovina.

Reich was homeschooled by tutors until 1910, when his mother committed suicide after her brief affair with one of the tutors had been discovered by Reich’s father. Reich wrote about being aware of the affair and how it had impacted him with feelings of shame, jealousy, and anger, and a struggle over whether to protect his mother or share her indiscretions with his father. He blamed himself for her suicide for many years.

After the death of his mother, Reich's father sent him to an all-boys gymnasium—a school that focuses on secondary instruction. In 1914, Reich’s father died from tuberculosis and the first World War began. Reich fled his home and joined the Austrian Army in 1915.

Reich entered medical school in 1918 and began to explore the works of Sigmund Freud while at the University of Vienna. During this time, Reich met and became a student of Freud’s and eventually worked as an assistant in Freud’s clinical practice. Reich was invited to become a member of the Vienna Psychoanalytic Association in 1920, and he earned his medical degree in 1922.

Reich taught psychoanalytic seminars in Vienna from 1922–1930 and worked as a psychoanalyst specializing in sex counseling. He established the Socialist Society of Sexual Advice and Sexual Research in 1928, and when he moved to Berlin in 1930, he created the German Association for a Proletarian Sexual Policy (shortened to SEXPOL). With Hitler’s rise to power, Reich fled to Denmark and was expelled from the German communist party in 1933. During this time, Reich published The Mass Psychology of Fascism and Character Analysis. In 1934, The International Psychoanalytical Association voted to exclude Reich based on his unconventional views. Unwelcome in many countries, Reich relocated to Norway where he taught at the University of Oslo until 1939, when he moved to New York. In New York, Reich worked in private practice and lectured at the New School for Social Research.

Reich died in 1957. In his will, he established the Wilhelm Reich Infant Trust to safeguard his legacy and ensure access to his work.

Reich is known for promoting controversial ideas that, for the time, were highly radical. He conducted experiments into sexuality that he claimed demonstrated that the skin developed an electrical charge in response to feelings of pleasure and anxiety. He studied the development of protozoa, arguing that substances such as blood and grass could disintegrate into mobile vesicles as a result of their energetic charge. He termed these vesicles “bions,” which means “life” in Greek.

Reich agreed with many of Freud’s theories, and both believed that human neurosis was based in economic, social, sexual, and physical conditions. He advocated progressive sexual education and promoted sexual liberation, access to contraceptives, and the acceptance of divorce and abortion. His influence is seen in the works of many mental health professionals' theories and techniques including body psychotherapy, Gestalt therapy, and bioenergetics analysis, among others.

Reich believed in the libido and the orgone, a term Reich created to refer to a cosmic energy he believed he had uncovered; the word is derived from the words orgasm and organism. He built orgone accumulators and was investigated by the FDA for selling the devices. Ultimately, a court issued an injunction against further sales. When Reich disobeyed this injunction, he was charged with contempt and imprisoned. The court also ordered that several of his publications be burned.

His radical theories made him one of the most influential and controversial figures in the history of psychiatry. The Austrian-American psychoanalyst’s experiments and theories have influenced decades of psychiatrists and psychologists and have affected the way therapy is delivered across disciplines. Other notable contributions include: 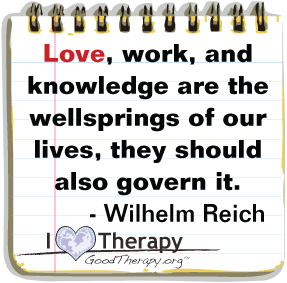