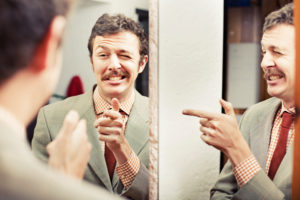 Egomania, occasionally referred to as megalomania, is extreme self-involvement and self-interest. It is often accompanied by feelings of greatness and superiority.

Egomania and Development
Many psychologists, including Sigmund Freud, have argued that humans are born in a state of egomania. Infants are primarily concerned with having their own needs met, and very young babies may not be aware of others as separate people capable of having their own feelings. Young children develop empathy and interest in others gradually over time. Thus parents and other adults should expect that children will be highly self-involved, and claims of egomania should be scaled to the age of the person experiencing egomania. A one-year-old who demands that the world revolves around him/her is generally considered to be exhibiting a normal response for his/her stage of psychological development.

Egomania is strongly associated with narcissistic personality (NPD), a rare diagnosis in which a person can struggle with empathy, be self-involved, believe they are destined for greatness, and may be cruel to others. NPD can be challenging to treat, but a combination of talk therapy and psychotropic medication is often effective. In addition, people with borderline personality may alternate between extreme egomania and extreme self-loathing.

Egomania can also play a significant role in addiction. Substance abuse often causes an individual to focus solely on their addiction, ignoring other people’s needs.

Some other mental health conditions may outwardly manifest as egomania. For example, people experiencing major depression may appear extremely self-involved and may be interested only in talking about their own feelings. However, people who are depressed often have low feelings of self-worth and thus are not egomaniacs, even if their behavior seems very self-centered. Schizophrenia may occasionally manifest as egomania, particularly when a person with schizophrenia experiences delusions of grandeur.