Voice Therapy® was developed by Robert Firestone, PhD. Voice therapy is a cognitive/affective and behavioral therapy that brings internalized negative thought processes to the surface with accompanying emotions, allowing clients to confront alien components of the personality. Therapist and client collaborate on corrective suggestions to challenge self-destructive behaviors. 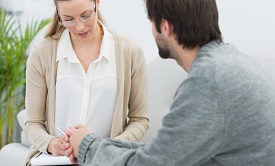 The Theory Behind Voice Therapy

Voice therapy is the process of giving language or spoken words to negative thought patterns that make up the foundation of maladaptive behavior. The “voice” speaks the language of the defensive process, or an integrated system of thoughts and attitudes that are antithetical to the self and hostile toward others.

Robert Firestone’s separation theory forms the basis for voice therapy. Separation theory integrates psychodynamic and existential approaches by explaining how the defenses that children develop early in life in relation to interpersonal pain in the family are strongly reinforced and become well established in the personality after they learn about death. The therapy involves separating from fantasies of fusion with others, known as fantasy bonds, as well as from critical inner voices that interfere with one’s movement toward individuation and autonomy.

The ultimate goal in voice therapy is to help clients achieve a more independent and free existence, to remain vulnerable to both the sadness and joy inherent in life, and to maintain the ability to respond appropriately to both positive and negative events in their lives. The method has been utilized as an adjunct to other therapies and has been applied in work with individuals and couples and in group therapy settings.

The voice therapy process consists of five steps designed to help clients move away from compulsive, self-limiting, and destructive lifestyles so that they can apply corrective strategies for positive behavioral change.