Murray Bowen was the oldest of five children, born on January 31, 1913, in the small town of Waverly, Tennessee.

He graduated from the University of Tennessee with a bachelor's degree in science in 1934. Continuing his education at the University of Tennessee Medical School, Bowen received his medical degree in 1937. Bowen worked as an intern at Bellevue Hospital in New York City and Grasslands Hospital in Valhalla, New York. Shortly after, he served in the military for five years, and he began to develop an interest in psychiatry.

Although Bowen had been accepted by the Mayo Clinic for a fellowship in surgery, he accepted a position as a fellow in psychiatry at the Menninger Foundation in Topeka, Kansas, in 1946. Bowen stayed with the foundation until 1954.

Bowen joined the National Institute of Mental Health in 1954 and began to form his family systems theory. For several years, Bowen explored family relationships and constructs while working with parents of schizophrenic children. He continued his research when he left NIMH for a position at Georgetown University Medical Center. As a clinical professor and director of Family Programs, Bowen was responsible for researching and teaching, and he founded the Family Center at the University. Bowen spent more than two decades at Georgetown, during which time he studied the emotional, physical, and social aspects of psychiatry as it related to family systems.

Bowen received many awards for his years of work in the field of psychiatry, including the Distinguished Alumnus Award from the University of Tennessee-Knoxville and the Alumnus of the Year from the Menninger Foundation. He was a member of the American Psychiatric Association, the American Board of Psychiatry and Neurology and was the president of the American Family Therapy Association in 1961.

Bowen further expanded his family systems theory with the belief that the behavior of each family member was influenced by his or her birth order and position in the family construct. As he delved deeper into the psychological depths of the family dynamic, Bowen realized that family members had different strategies for diffusing a highly emotional situation. Some members would leave the room, while others would look away or become silent. Each of these behaviors is a form of “emotional cutoff” that increases distance in order to avoid conflict and pain. Emotional cutoff is a temporary strategy that minimizes pain but does not get at the underlying problem. Open family relationships, by contrast, do not require these coping skills, and these close relationships that allow each family member to be an individual are goals of family systems therapy.

Through all of his work, Bowen always maintained a belief in differentiation. He thought that people could achieve emotional maturity during the course of their lifetime, develop close intimate relationships, manage reactions and behaviors, and ultimately develop a sense of full individuality.

Bowen also developed the theory of triangulation, a well-known concept in popular psychology. Triangulation occurs when a person refocuses their attention. For example, a couple that fights frequently might refocus their attention on a new baby rather than dealing with the conflict. 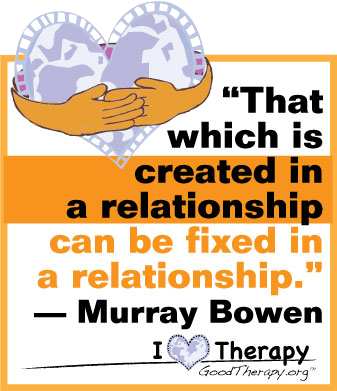 Bowen authored around fifty book chapters, papers, and monographs based on his work. His most influential publications include: