Harville Hendrix is a contemporary psychologist who co-founded Imago Relationship Therapy, along with his wife, Helen LaKelly Hunt.

Harville Hendrix was born in 1935 in Statesboro, Georgia. He was an ordained Baptist minister before he completed his BA at Mercer University in Georgia in 1957 and his BD from Union Theological Seminary in 1961. He went on to receive both an MA and PhD in psychology and religion from the Divinity School at the University of Chicago.

Hendrix serves as a therapist, educator, and pastoral counselor. He has spent the last two decades practicing and teaching his own form of marriage and relationship therapy known as Imago Relationship Therapy in collaboration with his wife.

Hendrix is internationally known for his work. He received the Owl award in 1988 from Henry Holt & Company for his book, Getting the Love You Want, a wildly popular self-help book that was featured on the "Oprah" show. He also received an Emmy Award in 1989 for his appearance on “Oprah,” and the BBC filmed a documentary about a workshop in Imago therapy that took place during a cruise. Hendrix has authored and co-authored several other self-help books, including Keeping the Love You Find, Receiving Love: Transform Your Relationship by Letting Yourself Be Loved, and Getting the Love that Heals: A Guide for Parents.

The term Imago means image, and Hendrix believes that people form their image of an ideal partner based upon early relationships and experiences. Hendrix argues that people unconsciously pick partners who are likely to frustrate them. For example, a very neat woman might be attracted to a very messy man. This can lead to personal and marital growth but can also contribute to the development of conflict. The right partner can help a person work through childhood issues and relationships; in this regard, marriage serves as a form of therapy and healing.

Hendrix recommends that couples take three key steps to resolve issues in their relationships and improve intimacy. First, couples must listen to one another carefully and then “mirror” what they have heard, rather than react impulsively or argue. For example, a partner might say, “If I understand correctly, you're saying you feel hurt when I don't wash the dishes.” The next step is validation, at which point each partner must validate the other's perspective. The partners do not necessarily have to agree. In the example of the dirty dishes scenario, that partner might say, “I understand how that might make you feel uncared for.” The final step is empathizing with the partner's position. The partner who's not washing the dishes, for example, will empathize with his or her partner's frustration, and the partner who wants the dishes to be washed might learn to empathize with the reasons his or her partner is neglecting these duties. 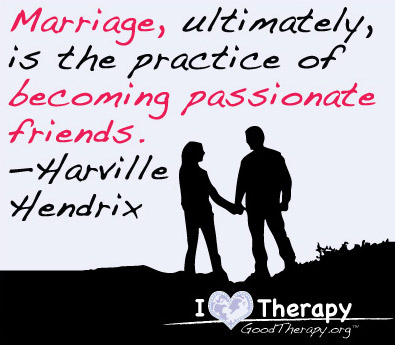