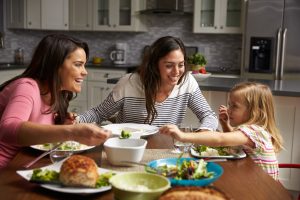 A new longitudinal study strengthens previous evidence that parental sexual orientation has no notable impact on childhood development. While this is not the first investigation to find the sexual preferences of parents don’t affect children, it is the first to track childhood well-being in relation to parent sexual orientation over time.

Published in the journal Developmental Psychology, the study followed 96 families with adopted school-age children as they moved through early and middle childhood. Parent combinations included a mix of heterosexual pairings and same-sex couples. The study tracked childhood behavior and adjustment along with family functioning and relationship variables.

The analysis found no significant differences between parent groups in any of the examined factors, including family characteristics and childhood outcomes. These findings are consistent with many previous studies that are similar in nature, but not longitudinal in design. According to the study, research has consistently found no differences between these parent types on several important measures, such as childhood stress levels and quality of mental health.

It is possible that continuing academic concerns about same-sex adoptive parents are the result of an existing conflict in popular psychological theories. For example, family systems theory is in line with the observed results, as it contends family functioning is more important than family structure. In contrast, family stress theory generates predictions of differences between children of same-sex and opposite-sex couples.

Variables That Do Impact Childhood Outcomes

Several other variables were found to have a significant influence on childhood outcomes over time. Specifically, it was shown that child adjustment problems and high parental stress in earlier years can contribute to a child’s behavioral issues and problems in overall family functioning during middle school. These additional findings provide potential targets for future research.