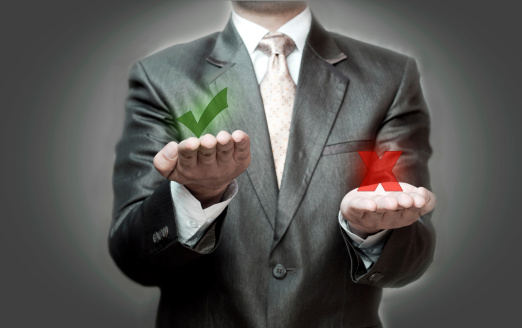 Rationalizing an event may help individuals maintain self-respect or avoid guilt over something they have done wrong. In many cases, rationalization is not harmful, but continuous self-deception, when a person consistently makes excuses for destructive behavior, can become dangerous.

Most of us engage in rationalization on a semi-regular basis. A person might account for a bad mood or general rude behavior by explaining that bad traffic affected the morning commute, for example. Someone who is passed over for a promotion might rationalize the disappointment by claiming to not have wanted so much responsibility after all.

Rationalization can be adaptive in that it protects people from unsafe emotions and motivations, but it can also contribute to maladaptive behavior and psychological concerns. Rationalization can become an obstacle in psychotherapy and can interfere with platonic and romantic relationships. An abusive partner who justifies behavior based on the abused partner’s failure to meet demands or by claiming the partner was otherwise uncooperative is engaging in pathological rationalization.

Rationalizations for behaviors can seem like logical, clear explanations, but trained psychologists strive to recognize the difference between logically explaining one’s behavior and covering up underlying emotions and motives.

Rationalization as a Defense Mechanism

Sigmund Freud described rationalization as a defense mechanism and the ego’s attempt to make a particular action acceptable to the superego—the part of a person demanding moral behavior. He also explained some motives for behavior are too uncomfortable or painful for people to face. An adult might be afraid of the dark as a result of being molested at night during childhood. That person might rationalize the fear by emphasizing that being unable to see one’s surroundings is dangerous or by pointing out most burglaries occur at night. According to Freud, understanding the unconscious motivations for behavior is an important precursor to healing.

Although contemporary psychologists have discredited or abandoned much of Freudian psychology, rationalization is generally accepted as a common defense mechanism.

Contemporary mental health professionals may not use traditional Freudian methods to understand rationalizations, but they do frequently work to help people in therapy access and understand the underlying motives for their feelings and behavior. A therapist who suspects rationalization of a person who may have experienced a traumatic or affecting event might encourage the person to confront the event honestly in order to address it in a healthy manner and begin the healing process.