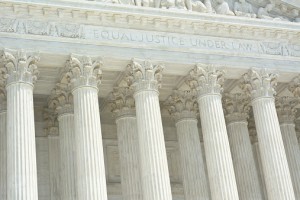 The Olmstead decision (Olmstead v. L.C. and E.W., 527 U.S. 581; 1999) was a landmark civil rights ruling issued on June 22, 1999. The decision affirmed the rights of people with disabilities to live in the least restrictive settings possible and emphasized the need to integrate people with mental disabilities into the larger community, allowing them to receive home and community based services (HCBS) rather than institutionalized care. This goal of integration is frequently referred to as the Olmstead mandate.

Lois Curtin and Elaine Wilson, two women institutionalized at a state-funded Georgia hospital due to mental health conditions and developmental disabilities, wished to leave the hospital and live in the community. Though mental health professionals and their individual treatment teams agreed that the women were ready to leave the institution and would be better served by living more independently within the community, they were not released and remained hospitalized for several years.

Eventually, the two women sued the state with the assistance of the Atlanta Legal Aid Society, an organization that provides free legal services to those who cannot afford expensive legal fees. Sue Jamieson, their attorney, argued that the Americans With Disabilities Act prevented discrimination against those with mental disabilities, and that keeping individuals with disabilities in an institution unnecessarily was discriminating against them. The case made its way to the United States Supreme Court, and the Court ultimately agreed with Curtin and Wilson, ruling that individuals with disabilities should receive services “in the most integrated setting possible.”

Effects of the Olmstead Decision

Because the case was litigated all the way to the Supreme Court, the Court’s ruling applies to all 50 states. Under the ruling, people with mental health disabilities are protected under the Americans With Disabilities Act, and unnecessary institutionalization—even institutionalization that the state pays for—is considered a form of disability discrimination.

As a result of the ruling, thousands of people with mental illnesses and developmental disabilities are able to live more independently. Both Curtin and Wilson reported improvements in their conditions after their reintegration into the community, and states across the country have implemented plans to reduce the needless institutionalization of people with mental health disabilities and focus instead on expanding HCBS options to better serve those with disabilities.

Olmstead has particular significance for young people who are transitioning from government programs or special education into the adult community, as it allows them to more easily access adult community services and integrate more successfully into the community, rather than face inappropriate placement in nursing homes and other institutions.

The effects of Olmstead appear to be overwhelmingly positive, although many states do still continue to struggle with the implementation of the decision due to concerns about funding or a lack of community services sufficient to serve all those desiring community integration. Some states place unwarranted focus on transitioning individuals already in the community into HCBS programs before releasing institutionalized individuals into appropriate community programs. Concerns have also been voiced over states simply placing people in a slightly less institutionalized setting, such as a group home instead of a nursing home, even though the person may be perfectly able to live in their own apartment with some support.

Other challenges arise when individuals are unaware of their rights under Olmstead. Sometimes the wishes of a person with mental disabilities are ignored by caregivers or family members who believe they have the individual’s best interests in mind. Even when a person wants to live in a more integrated way in society, he or she may not assert a personal preference when that goal seems unattainable.

In 2009, President Obama celebrated the 10th anniversary of the Olmstead ruling with the Year of Community Living, a Health and Human services program that provided $140 million in funds for independent living centers throughout the United States and sought to increase access to housing and community services for individuals living with disabilities.

The Atlanta Legal Aid Society, the organization that litigated the Olmstead case, debuted a website on the 15th anniversary of the ruling. That site, I am Olmstead, highlights the stories of people living with mental health disabilities, showing how Olmstead has impacted them by making it possible for them to re-enter the community.