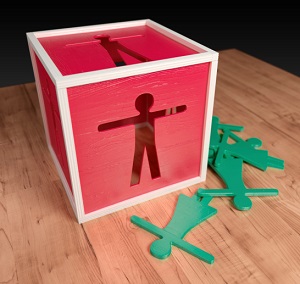 Misogyny refers to the outright hatred of women, and typically is expressed as sexual discrimination or objectification of women or girls. Because misogynistic behavior and attitudes are a widespread issue, many women internalize it, which may take the form of self-objectification and passive acceptance of traditional gender roles.

A person who feels justified in abusing, belittling, attacking, or violating a woman simply because she is a woman is an example of misogyny. Less violent forms may appear within families, classrooms, or job settings. For example, a father may find it difficult to see beyond his daughter’s gender and may treat her differently than he would a son; a teacher may discourage a young woman from pursuing academic disciplines or career paths that are typically affiliated with men, such as math, science, and technology; and an employer may refrain from offering a promotion or raise in pay to a female employee, regardless of the quality of her work.

Other examples are the everyday instances of men calling women derogatory names in public, or reducing them to objects by remarking on and paying attention to their physical appearance and nothing beyond that. Objectification, in general, is a form of misogyny in which the woman is seen as an object designed solely for sexual pleasure and gratification.

A lesser known form of misogyny occurs between women; women may very well internalize the misogynistic messages of society at large and project them onto one another. On a broader scale, this may manifest as a general lack of trust in other women. A woman may also look down upon and condemn another woman for the way she dresses or for being an overtly sexual being; or she may feel threatened by a female competitor and search for ways to keep her from succeeding. Sadly, such behaviors only serve to reinforce the negative female stereotypes that can fuel misogyny.

Impact of Misogyny on Mental Health

One of the most devastating effects of misogyny is on the women who are raised in families and societies where its prevalence is so strong that women learn to hate themselves from a young age. This is referred to as internalized misogyny (Szymanski, Gupta, Carr, and Stewart, 2009).

In some circles, women may be taught to be ashamed of their beauty, their bodies, or the effect they have on men. They may be mistreated or abused and made to believe it is their fault because they have been taught that men often find it difficult to restrain themselves around women. If a woman is raped or violated sexually, there are some who would posit that she is the one to blame if she dressed or acted in a suggestive, revealing, or sexual manner. For the victim, this may contribute to mental health issues; she is essentially being told she is at fault for being attacked, which heaps shame, guilt, and condemnation on her already wounded body and psyche. Some women have committed suicide in the wake of such a traumatic incident.

The internalized impacts of misogyny on young girls and women may be reflected in issues with body image, disordered eating, and obsessive dieting or exercise. With the message of female objectification deeply ingrained in the minds of many women during their formative years, the pressure to maintain an appearance that is pleasing to men—and prettier than other women—is often unavoidable.

Misogynistic leanings also affect the psychological well-being of perpetrators of hatred and violence as well as demeaning attitudes toward women. Men who cannot love women will often find it difficult to sustain long-lasting, healthy intimate partnerships with women. Women who hate women can struggle to maintain meaningful, supportive relationships with other women. Both of these experiences may lead to feelings of isolation, loneliness, and depression.

Some theories posit that misogyny originates from a fear of the power and sway women potentially possess over men due to the strong allure of the female form. In order to maintain self-control in their presence, men may hate or attack women to subdue or avoid confronting their own feelings of desire and weakness. This likely occurs on a subconscious level, as they may have been conditioned to view women in a negative light by familial, social, and cultural influences.

This conditioning is, in part, rooted in the widely read religious texts and beliefs imposed by some religious institutions. A number of Biblical stories and teachings depict women as temptresses and sources of immoral pleasure and indulgence; these teachings may send the message that women are not to be trusted. For example, in the Bible, the great fall of humanity is attributed to Eve’s disobedience; according to doctrine, she was the first woman created by God and the first human being to commit a sin.

Delilah is another biblical character in the Old Testament who seduces and betrays Samson, an Israelite and one of God’s chosen. Jezebel was a Phoenician wife and cult leader who was triumphantly killed by the Israelites; as per Merriam-Webster’s definition, the name Jezebel is now synonymous with “an impudent, shameless, or morally unrestrained woman.”
This general theme can be found in the Bible: great men being led astray by wayward, self-seeking women. There are also several stories that tell of the integrity and honor of women who pray, obey, serve, and remain silent in the presence of men.

The well-known Russian writer Leo Tolstoy is another who wrote extensively on his condescending, often condemning views of women and their sexuality; he referred to wives as “long-term prostitutes” and eventually came to the conclusion that avoiding sex altogether was the only way to protect oneself from the potential “emotional abandonment” that may accompany an intimate sexual relationship with a woman if she chooses to leave (Rancour-Laferriere, 1998).