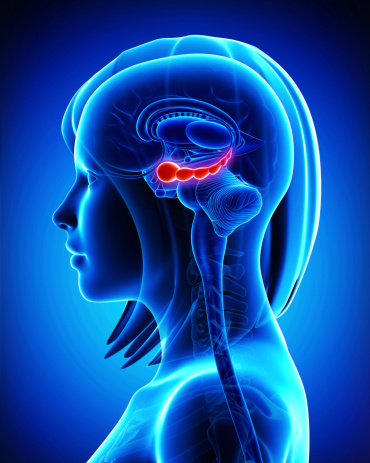 The hippocampus is a seahorse-shaped brain structure that is part of the limbic system. It deals with the formation of both short and long-term memories as well as spatial navigation, and it is the primary location for the conversion of information to memory. There are two hippocampi in the brain—one on each side of the medial temporal lobe.

Functions of the Hippocampus

Emotion and memory are inextricably linked, and emotionally-charged memories tend to be stronger. The hippocampus is partially responsible for this fact. It links both emotions and sensory input to memories and then sends memory-storing signals to the cerebral hemisphere. When a person smells something and then has an overpowering emotional reaction by recalling a specific event associated with the smell, this is partially due to the functions of the hippocampus. The formation of declarative memory, which is a memory that can be consciously and verbally stated, is a significant function of this brain structure.

Illness and the Hippocampus

A general weakening of memory often occurs as a person ages, and many clinicians have theorized that this type of memory loss could be due to deterioration in the hippocampus over time. Seizures, especially the recurrent seizures that result from conditions such as epilepsy, can cause damage to the hippocampus, as can long-term stress. The effects of long-term stress on the hippocampus may help explain why people experiencing a significant amount of stress can struggle with both memory and learning.

Scientists have also discovered that the hippocampus is extremely relevant to some mental conditions such as schizophrenia and depression, as the hippocampi of those who have schizophrenia or who are experiencing severe depression has been shown to shrink. This shrinkage can potentially be reversed through treatment with antidepressants and, in some cases, prevented before it becomes severe.