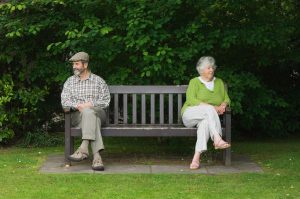 Gray divorce, also called late-life divorce, is a term used to describe divorces that occur among older adults, or adults who are over the age of 50. This type of divorce has been increasing in recent years.

What Is Gray Divorce?

Approximately half of the married couples in United States are over the age of 50, making up a significant portion of the married population. Divorce among older adults within this population is on the rise, and the phrase “gray divorce” was coined to describe this specific type of divorce.

Many have speculated about why more and more older adults are now choosing divorce, citing things like longer life expectancy, increased financial freedom, and marriage dissatisfaction or boredom. One couple in their sixties shared, in a recent Los Angeles Times article discussing the phenomenon, that they had opted for divorce after realizing they did not want to spend their remaining years stuck in an unsatisfying marriage.

According to a study conducted by the National Center for Family and Marriage Research at Bowling Green University, the divorce rate among older adults has doubled between 1990 and 2010, an increase that contrasts with the stabilizing divorce rates among other age groups. Further exploration may help provide empirical evidence that explains these growing numbers, but researchers have speculated about the possible reasons for the rising divorce rates among couples over 50.

One probable explanation might be that many older adults are members of the Baby Boomer generation. Baby Boomers were the first large group to divorce and remarry as young adults. Statistically speaking, remarriages are more likely to end in divorce, so older adult Baby Boomers may be contributing to the rise in numbers of later life divorce.

Over the past several decades, divorce has become less stigmatized and more widely accepted in the United States. Adults entering their later years may simply have less of a problem with divorce than they may have earlier in life, due to greater direct and indirect exposure to it.

Another explanation for the rise in gray divorce could be related to the way women have continued to gain more financial freedom than in years past. Since women have entered the workforce in greater numbers, they have been in a better position to pursue divorce and live independently in their later years as compared to earlier generations.

Finally, growing life expectancy among Americans, coupled with medical advances that support the maintenance of health and well-being could explain the rising divorce rates among older adults. People are living longer, and so more marriages may be ending ending as a result of divorce rather than the death of a spouse.

What Leads People to Divorce Later in Life?

A number of contributing factors may play a part in a couple’s decision to divorce later in life. One reason may simply be boredom, or distance. Over the years of a long marriage, people might begin to fall into a routine with each other that, after a period of time, no longer works for either of them. Long-term couples may grow apart, and this distancing may inevitably lead to a divorce that is less about intense conflict and more about the fact that a couple does not love each other any longer.

Some couples may avoid divorce earlier in their marriage for financial reasons, staying together simply because they cannot afford to split up. But after years of saving money and acquiring greater means, divorce may become more feasible. Life changes, such as retirement, might also have an impact on a marriage, as the retirement of one or both partners can create a new dynamic. Differing interests, increased time spent together, or lifestyle changes can all expose the issues in a marriage, whether it is an “unhappy” marriage or simply one that has become distant.

Many couples make the attempt to stay together for the sake of their children, but after the children have grown and moved out, parents may finally feel it is the right time to address issues of concern in their marriage and attend to their own needs. Because children can serve as distractions from relationship discord, some couples with young or teenage children may find it easier to ignore issues of their own, particularly relationship problems, and focus on the needs of their children. When the final child leaves home, however, some couples realize they no longer want to be together.

Although divorce can be tough for couples and families in all phases of life, older adults who divorce may face some unique challenges.

Money and financial issues may become an important concern for many individuals. When older adults divorce, they have less time to recover financially before they retire. The process of splitting assets, retirement funds, life insurance policies, and properties can be extremely stressful, not to mention the fact that these funds will now have to support two households. This dividing of wealth can lead to changes in economic status for one or both spouses. Alterations in benefits, insurance, social security and income may even leave some in poverty. When it comes to long-term marriages, alimony (spousal support) is almost always granted, and this may further complicate financial issues for many.

Couples who divorce later in life are not exempt from having to take their children into consideration. Adult children of divorce can experience the repercussions of their parents’ decision in the same way young children can, except they may have more awareness about certain aspects of the divorce. Things like inheritance, elder care decisions, and estate planning are all likely to be affected by gray divorce. Adult children of divorce may also deal with trauma, grief, loss of closeness, and challenging shifts in family dynamics and traditions.

Another area posing that be cause for particular consideration is health and wellness. As people age, they are at greater risk for medical issues that can impact their ability to make decisions in their best interest. Dementia, Alzheimer’s, and other neurological problems can make divorce proceedings challenging. Thus, it is often recommended older adults seek specialized legal support for seniors dealing with these issues.

Gray divorce can impact the health and well-being of the couple and their loved ones. Adult children and grandchildren may experience symptoms of grief, loss, or trauma associated with the changes in their family dynamics. Not only might this add stress to an already difficult time, it often creates new conflict between family members.

Individuals who divorce later in life might experience financial repercussions and in some cases may end up sacrificing their own physical and mental health in order to attempt to make ends meet. This is an important consideration, especially when taking into account how poverty influences health. Gray divorce may put older adults at risk for health issues like hypertension, stroke, depression, and anxiety.

Because of these potential risks, therapy can be helpful for gray divorcees as well as their adult children and families. Family therapy, couples counseling, and other forms of support can help ease the transition period that generally follows divorce, especially when this period poses difficulty for individuals and their families.