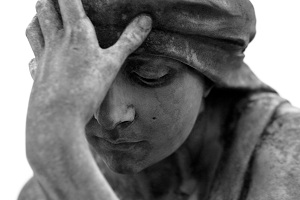 Persistent depressive disorder, also known as dysthymia, is the state of having a mild to moderate chronic depressed mood. According to the Diagnostic and Statistical Manual (DSM), the symptoms of dysthymia are less severe than those of major depression, but the condition, being chronic, also tends to last longer than a major depressive episode.

For dysthymia to be diagnosed, this mood must persist for at least two years, or for one year in the case of an adolescent (who may report feelings of irritability rather than sadness). If symptoms meet the diagnostic criteria for major depressive disorder in this two-year period, both conditions will generally be diagnosed.

This condition is distinguished from major depression by its duration; in other words, it is a chronic form of depression. Symptoms may increase in severity to the level of those experienced in a major depressive episode. Generally, they will once again decrease in severity but will not resolve entirely. Symptoms may vary over the course of the illness, but two or more of the following symptoms will be present consistently in combination with a chronically sad or depressed mood:

Often, symptoms of dysthymia can become such a part of daily life that they are not as likely to be reported, unless the person experiencing the symptoms is asked about them directly. It is somewhat common for a person with dysthymia to be unable to remember a time when the condition was not present, and the feelings of depression may have come to feel normal.

Dysthymia often begins with symptoms of traditional depression. It is common among the elderly and among people who are isolated, who have health problems, or who have another mental health condition. The condition appears to be more common in women than in men, and about 5% of the population suffers from dysthymia at least once. The condition may have a genetic element: Having a relative with either dysthymia or major depression appears to increase the likelihood of developing dysthymia. Parental loss or separation in childhood can be a risk factor for this condition, and brain chemistry might also increase a person’s chance of developing major depression or dysthymia. 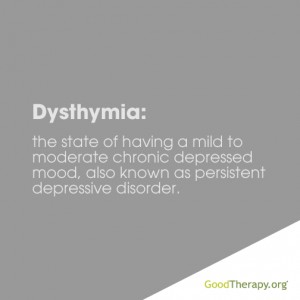 Because the symptoms of dysthymia may be less pronounced than the overwhelming depression and suicidal ideation that often characterizes major depression, the condition can sometimes progress significantly before treatment is sought. Those with dysthymia might hold negative beliefs about the world or oneself or have a negative outlook on most aspects of life, but they may not remember a time when they did not feel that way and be unaware that they are experiencing a mental health condition. A delay of up to 10 years before seeking treatment is not uncommon in those who experience dysthymia. Thus, treatment may take longer. Untreated dysthymia also has the potential to progress to major depression.

A combination of therapy and medication can help alleviate the symptoms. Studies indicate that cognitive behavioral therapy (CBT) is especially effective at treating chronic forms of depression. In therapy, any potential causes of dysthymia can be identified and addressed. Spontaneous remission—alleviation of symptoms for no apparent reason—may also occur.

In some cases, a psychiatrist may prescribe medication as a supplemental treatment to therapy: SSRIs are often effective at treating dysthymia, and clinicians may also prescribe other antidepressants such as Wellbutrin or tricyclic antidepressants. An anti-anxiety medication may also be beneficial to some.