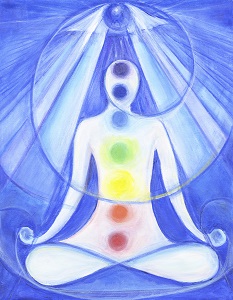 The concept of a chakra has its origins in Hinduism and Buddhism, and some practitioners of yoga and tantra use chakras in their practice. These energy centers can be accessed using certain techniques, and can alter a person’s health, personality, and skills. Chakras are not usually believed to be literal places in the body that can be seen, but are instead spiritual locations in the body that can be accessed, perhaps even touched.

Energy Centers in the Body

Chakras are generally conceptualized as seven different energy centers in the body, beginning at the head and ending at the base of the body. Each chakra correlates to a color, and some practitioners believe that activating a particular chakra also activates a specific kind of color energy–potentially even causing a person to see that color. For example, the crown chakra–located at the top of the head–is associated with the color violet, which is believed to be associated with leadership, concern for others, and some diseases such as Parkinson’s disease and Alzheimer’s disease. Dysfunctions in these traits or bodily illnesses correlated with this chakra can result in imbalance. Practitioners of tantric sex may attempt to activate certain chakras either by touching the area the chakra is associated with, envisioning the chakra, or using color to alter sensation during sex.

The Science of Chakras

Chakras have never been scientifically proven, but those who believe in chakras and color therapy argue that chakras are a philosophy, and not necessarily intended to be taken literally. Furthermore, people who meditate on their chakras or who practice tantric sex may experience real physiological changes, demonstrating the inextricable linkage between the mind and the body.