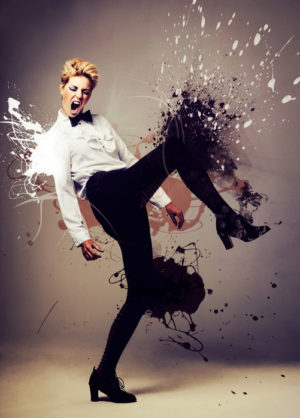 Sophia Dembling wrote, “One of the risks of being quiet is that the other people can fill your silence with their own interpretation: You’re bored. You’re depressed. You’re shy. You’re stuck up. You’re judgmental. When others can’t read us, they write their own story—not always one we choose or that’s true to who we are.”

But sometimes even when others could choose to “read” us—by being curious, asking questions, and collaborating with us and honoring what we value—they choose to write over us instead. This is particularly true when one person has more social power or when their values are already maintained by external forces. They have more permissions already; they have more of a voice. In these situations, we might not be quiet by nature so much as silenced.

Some aspects of our lives come more pre-packaged and scripted than others—namely, our stories about gender. And we haven’t got a fighting chance to tell our own gender story if it’s been decided for us before we are even able to speak or choose our own adornments—for most of us, this takes place before we are even born. Ideally, babies would come into a home where love can be flexibly provided for many variations of expression—but many of us will be subconsciously “shaped” into something “More Appropriate” if we deviate from culturally-sanctioned ideals.

But even if this is your experience, it is not everyone’s—or even most people’s—experience. Keeping this in mind, listen for stories that differ from your own.

Transgender and gender non-conforming folks claim the permission of asserting (not choosing) their gender identity and sense of self rather than accepting what has been assigned to them. This becomes increasingly necessary if what has been given to them (“prescribed” gender, typically based on the sex category assigned to a person at or before birth) never fit that person, no longer fits that person, or sometimes doesn’t fit that person. Transgender and gender non-conforming people are claiming their own power over their bodies and voice.

It is here I want to assert my position: unless a person is directly harming another person, how they want to speak or adorn themselves is not for us to decide—unless we are that person’s parent. When we take on a parental role with a person we are not parenting, we are indicating we have decided we are not equals with the person, that we cling to a sense of power over them. (For instance, when we become the “gender police.”)

The following description of narrative therapy comes from the Dulwich Centre in Adelaide, Australia: “Narrative therapy seeks to be a respectful, non-blaming approach to counselling and community work, which centres people as the experts in their own lives.” I distinguish here between therapy styles that give people expertise over their own lives vs. the power our mental health system has traditionally exerted over those who come for help. Narrative therapists co-create meaning with the people they are treating; traditional therapy prescribes meaning onto the experiences of the person in therapy.

(I don’t want to pretend a truly democratic relationship can exist between therapist and person in therapy. Not only is there a transaction of money, but—in the case of individuals advocating for their own gender transition and especially in the case of those desiring hormone therapy—therapists are also in a position to determine whether or not the individuals they are treating are “of sound mind.” Thus they are the gatekeepers of access to desired medical treatments.)

Narrative therapy acknowledges the power discrepancies between therapist and person in therapy but seeks to minimize them as much as possible. This modality is a collaborative, democratic style of therapy where what something means to the person in treatment is equally or more valuable than what something means to the therapist. It involves listening to the words of the person receiving therapy, tracking the themes relevant to their life, and determining which stories were authored authentically by the individual and what stories were told to them and enforced by the Powers That Be.

In an attempt to subvert some of the gatekeeping power that has existed within my profession since its origin, I wanted to write about some narrative therapy tactics that can be self-taught and used by the chosen family and communities of transgender and gender non-conforming individuals in order to support and enrich their loved ones’ sense of self! Chances are, you are already using some of them.

How can we do this? One of my favorite exercises to facilitate with multiple people in therapy is to ask them to think of a time they felt confident and tease this out. I have them name what they valued about that version of themselves and what made it possible. The other person (or people) is/are assigned to “track” instances of when they caught that person exhibiting those traits in their present life, in their present interactions. This can be effective for people battling depression, when they feel the “old” them is lost, as this can serve to remind them their “true” self still exists—but this exercise can also be of great benefit in affirming the gender expressions of those we love!

If your friend or loved one is transitioning, find out the values of the gender identity they are looking to embody and affirm them! If your friend’s experience of self exists outside of the language surrounding gender, don’t praise them for being “rational and fair” or for being “so pretty and thin.” Instead, figure out what matters to them and make an effort to witness them living these values authentically in the world. See them in the ways they need to be witnessed and affirmed.