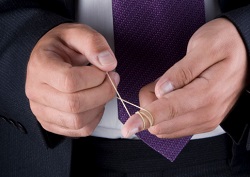 Aversion therapy is a treatment method in which a person is conditioned to dislike a certain stimulus due to its repeated pairing with an unpleasant stimulus. For example, a person trying to quit smoking might pinch his or her skin every time he or she craves a cigarette. This type of therapy is highly controversial.

Aversion therapy was built upon behaviorist research, which suggests that conditioning is a highly effective form of learning, even in otherwise uncooperative people. Chemical and electrical aversion have been the most commonly employed techniques, although these techniques have seen a decline in recent decades. Visual imagery has become a more acceptable and sometimes more effective form of aversion therapy, in which a person focuses on the target behavior while visualizing an undesirable consequence.

A variety of aversive techniques are used in a therapeutic setting. A therapist trying to help someone eliminate a problematic behavior might show a person photos of something associated with the problematic behavior—cigarettes, drugs, and so on—and then administer a shock or pinch. In other cases, a therapist might suggest that a person self-administer aversive techniques, such as visualizing something unpleasant or snapping an elastic band on one’s wrist or to help deter cravings or disrupt negative or compulsive thought processes.

Drug and alcohol treatment programs have traditionally used aversion therapy techniques, such as electrical shocks or nausea-inducing medications, to help people reduce or eliminate cravings for the substances. For example, some medications can cause people with addiction problems to feel ill when they consume alcohol or drugs. Although these techniques have largely fallen out of favor across the mental health community and are often regarded as less successful than other methods, many treatment facilities still use them in conjunction with other therapeutic interventions.

There is significant controversy about the ethics of aversion therapy, particularly when practitioners are administering painful stimuli to patients. Most mental health professionals oppose aversion therapy techniques except for those where the person is self-administering the aversive stimulus. Some practitioners find the practice to be an ineffective long-term strategy, because a person can easily revert back to undesirable behaviors and habits in the absence of the unpleasant stimulus, and, like other behavioral techniques, aversion therapy may not take into account deeper emotional needs that are driving the undesired behavior.

Aversion therapy techniques have also been used in reparative therapy or conversion therapy, which is designed to convert gay people to heterosexuality. Aversive techniques have included administering shocks to a person’s genitals or inducing a person to vomit when he or she is stimulated by sexualized images of members of the same sex. Numerous groups have spoken out against this practice, and people who have been subjected to it have lambasted it as both abusive and ineffective. Conversion therapy has also been used to "treat" people who identify as transgender, the intent being to force them to adopt the gender expression that matches their biological sex. In some cases, minors are sent to conversion camps or treatment facilities by their parents, thus eliminating any option to consent to the therapy. Some states, including California and New Jersey, have banned conversion therapy for minors. Many other states are moving to follow suit.

Nevertheless, several prominent religious people have spoken out in favor of the process, claiming to be “ex-gays.” Conversion therapy may affect a person’s sexual expression, perhaps by making the person feel guilt or shame for his or her feelings, but the process is unlikely to create heterosexual urges or to change a person’s sexual orientation. In fact, the American Psychological Association's (APA) Task Force on the Appropriate Therapeutic Responses to Sexual Orientation determined that “efforts to change sexual orientation are unlikely to be successful and involve some risk of harm.” The process of conversion therapy can lead to “loss of sexual feeling, depression, suicidality, and anxiety,” according to the APA. Conversion therapy’s use to “cure homosexuality” also helps contribute to the idea that gays and lesbians are fundamentally flawed, which can contribute to a culture of bullying and discrimination.