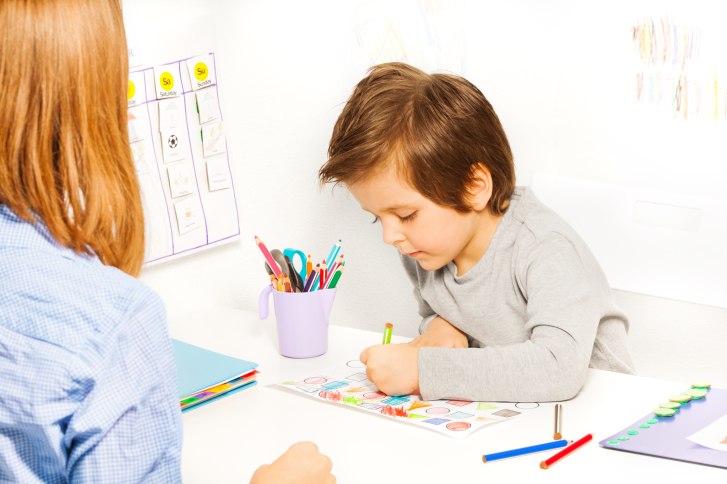 Applied behavior analysis (ABA) focuses on teaching skills and modifying behaviors. ABA therapists use behaviorist learning principles, such as operant conditioning or classical conditioning, to direct an individual’s actions. With practice, an individual will replace undesired behaviors with desirable ones.

ABA was initially created in the 1960s to support autistic children. Today, it is sometimes used in therapy for ADHD or traumatic brain injuries, but autistic people still make up the vast majority of ABA recipients. According to a survey by the Association of Professional Behavior Analysts, more than 80% of ABA practitioners work with autistic children.

In the early 20th century, John B. Watson proposed his belief that psychology should be concerned with the study of observable behavior as opposed to private internal events. He theorized that an individual’s behavior was determined by environmental stimuli. B.F. Skinner expanded on this theory, saying that the consequences of behavior were also important. Rewards and punishments could influence future behavior just as much as the environment could. This school of thought became known as behaviorism.

In the mid-1960s, Ole Ivar Lovaas used behaviorist theories to create ABA. His goals were to:

Prior to the 1960s, many professionals considered autistic children to be incapable of learning or becoming self-sufficient. Autistic kids were often sent to live at psychiatric institutions in inhumane conditions. Lovaas hoped his ABA therapy would allow many of these children to live in the larger society.

Lovaas taught life skills by breaking them down into smaller tasks. For example, he might teach tooth-brushing by first teaching a child how to put toothpaste on the toothbrush. When the child did the task, he would verbally reward them with a “good job” or “nice work.” The next session, Lovaas might teach the child how to orient the toothbrush toward their mouth. Once each step was learned, the child could string them together into the fairly complex task of brushing their teeth.

Many studies have suggested ABA is effective in improving autistic kids’ skills. In the first experiment on ABA (1973), 20 autistic children received 14 months of ABA therapy. During treatment, their verbal and nonverbal behaviors improved, and their IQ scores rose significantly. A study in 1987 found 9 out of 19 children who received ABA were able to progress to a typical educational setting. Only one child from the control group was able to do the same. More recent studies have had similar findings.

ABA therapists can use a variety of approaches during sessions. These include:

DTT was the first version of ABA. In DTT, specific skills are broken down into smaller, discrete steps. Each step is practiced a set number times. If the child performs a task correctly, they are given rewards such as stickers, candy, access to a toy, etc. If an incorrect response is given, the therapist may repeat the question or give the child an instructional prompt.

For example, a therapist may write the alphabet on a dry erase board and ask the child to underline the first letter of his name. If the child pauses for too long, the therapist may prompt him by pointing at the letter. Prompts are usually faded out gradually as the frequency of correct responses increases.

DTT typically occurs in structured therapeutic settings. Often the therapist and child sit across from each other at a table to practice tasks. While this setting is less “natural” than a classroom or playground, the structured sessions can make it easier to analyze changes in behavior.

This method employs the same reward-and-prompt approach as DTT. However, incidental training aims to teach behaviors within the context of the child’s daily life, such as during playtime at school or dinnertime at home. Unlike DTT, incidental training can be conducted by parents and teachers outside a therapy office.

Incidental training uses organic opportunities to teach skills. For example, during playtime a girl might say to her teacher, “Want ball.” The teacher could use this question as a chance to teach conversation skills. He might ask, "Which one? Do you want the red ball or the blue ball?" If the girl elaborates and names the color of the ball she wants, the teacher would reward her with that ball.

Rather than teaching a specific task, PRT teaches more general skills like taking turns or initiating conversations. These “pivotal” skills lay the groundwork for many different social behaviors, so they can help kids learn many types of tasks. When a child masters a pivotal skill, parents typically notice improvement in several other areas. For example, a child who learns how to sit quietly during therapy may listen more attentively to directions and exhibit better behavior in school.

Unlike discrete trial training, PRT has a more play-based format rather than an instructional one. As a child plays, a therapist may look for opportunities to teach a pivotal skill. They often reinforce these behaviors with intangible or context-dependent rewards as opposed to candy or stickers.

ESDM is one of the newer forms of ABA. It can be play-based or occur in a more traditional instruction format. Unlike with discrete trial training, an ESDM professional will try to teach multiple skills within the same exercise.

In DTT, a therapist may teach a child to put a square block into an open box. In ESDM, the therapist may ask the child to put the square block in a zipped-up bag. This exercise would not only teach the child about shapes, but also let them practice the motor coordination necessary to unzip a bag. Although teaching multiple skills at once may be difficult, some therapists find this method more efficient.

The Behavior Analyst Certification Board (BACB) is the professional body responsible for certifying behavior analysts. In order to be eligible for the certification examination, individuals must have earned at least a master's degree in behavior analysis or a related field approved by the BACB, such as education, psychology, or social work. They are required to complete specific graduate-level coursework in behavior analysis as well as several hours of supervised experience. The coursework and experience requirements are described in detail on the BACB website.

Once individuals pass the certification examination, they are recognized as Board-Certified Behavior Analysts (BCBA). Recertification occurs every three years and requires the completion of several hours of continuing education.

While Lovaas’ ABA trials did help many autistic families, his early experiments also had major ethical pitfalls. In contrast to today’s standards, Lovaas was rather zealous in his use of punishments (also called “aversives”). In one infamous example, Lovaas and his team of researchers were trying to teach two five-year-old twins to be more affectionate. A researcher would command one of the boys to hug them. If the boy did not obey within three seconds, he and his brother would get an electric shock.

Other punishments included slapping children, subjecting them to loud noises, and denying them any food other than what they received as rewards for good behavior. When parents were hesitant to enact these extreme methods, Lovaas argued that his treatment was the only way to stop autistic kids from injuring themselves. Later in life, Lovaas would retract this assertion. He conceded that many behaviors he previously thought of as willful disobedience requiring punishment were in fact attempts to communicate by kids who had been given no other way to express themselves.

Modern ABA professionals no longer use aversives such as electric shocks. In fact, most ABA practitioners avoid punishment altogether and only use rewards. If a child fails a task, an ABA therapist will typically give them further prompts or assistance until the child succeeds.

One exception is the controversial Judge Rotenberg Educational Center (JREC), the only institution in America that still uses electric shocks on autistic individuals. Some JREC students are forced to wear a backpack and wires which the teacher can use to shock them for “misbehavior.” These shocks can sometimes be harsh enough to burn students’ skin. Disability advocates and the FDA are trying to get the device banned, but as of 2019 it is still being used.

Many autistic advocates claim ABA can be harmful even without the use of aversives. There are still many ABA practitioners who prioritize making an autistic child look and act “normal” over helping them communicate. For example, an ABA professional may try to train an autistic child to make prolonged eye contact during conversations, even if eye contact causes the child significant discomfort.

ABA supporters believe teaching neurotypical behaviors is ultimately in the child’s best interest, since society still heavily stigmatizes autism. For example, a man who calms himself down by rocking in his chair may have trouble finding employment. ABA critics argue that stimming is a harmless behavior that helps autistic kids cope with intense emotions and sensory processing issues. They oppose teaching children to suppress physical discomfort or hide their autism in order to “earn” equal treatment.

It is important to note that not all forms of ABA are considered harmful. ABA professionals who focus on enabling communication or teaching life skills (like bathing) are less likely to be labeled problematic. According to autism advocates, the focus of ABA and other therapies should be fostering a child’s independence and everyday functioning, not enforcing conformity or obedience.

If an ABA therapist is not careful, research suggests it is possible to cause a child significant harm. A 2018 study found 46% of autistic people exposed to ABA met the criteria for posttraumatic stress (PTSD). ABA-exposed autistic people were 86% more likely to meet PTSD criteria than their non-exposed peers. According to the study authors, one possible explanation for this phenomenon is the suppression of stimming. If a child is forbidden from stimming and given no other way to self-regulate, they may experience a traumatic sensory overload. However, more research is needed before this theory can be confirmed (especially since the autistic survey respondents were disproportionately female or nonbinary).

Like other forms of treatment, ABA therapy can be beneficial or harmful depending on how it is used. The well-being of the person in therapy should always come first.