Eric Berne was a 20th century psychologist who developed and popularized the theory of transactional analysis.

Eric Berne was born Leonard Eric Bernstein on May 10, 1910, in Montreal, Canada to a writer and a physician. His father contracted tuberculosis and passed away when he was young, and Berne and his sister were raised by his mother. Berne studied medicine at McGill University, and received his degree in 1931. He entered a residency at Yale, where he studied psychiatry and psychoanalysis.

Berne became an American citizen in 1939 and later changed his name from Bernstein to Berne, though he often used pseudonyms for his professional articles. Berne briefly served in the army during World War II, and upon release, he returned to his studies.

Berne was married three times, each time ending in divorce. He had four children—two each from his first two marriages. He died in 1970 from a heart attack.

One of Berne’s teachers was Erik Erikson, and they worked together for two years. In 1950, Berne took a position at Mt. Zion Hospital as Assistant Psychiatrist. Berne worked at several hospitals throughout the San Francisco area and continued his study of psychoanalysis while practicing as a group therapist.

His views began to conflict with traditional psychoanalytic theories, and the distance between Berne and the psychoanalytic community increased when he was refused entrance into the San Francisco Psychoanalytic Institute in 1956. Berne began exploring intuition and eventually created the theory of transactional analysis (TA).

Berne's best-known contribution to psychology is his development of transactional analysis. TA combines elements of psychoanalysis and cognitive theories of human behavior, and it offers both theories of personality and personal growth.

According to Berne's transactional analysis theory, people can exist in three ego states: adult, parent, and child. A person functioning in the adult role—also called the neopsyche—has healthy interactions that are not heavily influenced either by emotions or by baggage from childhood. People acting in the role of the child—the archaeopsyche—adopt behavior patterns similar to their childhood behavior, often in an attempt to resolve childhood conflicts. For example, a person might sulk or pout when his or her partner is inattentive. People who fill the parent role—or exteropsyche—mimic their parents’ reactions to others. Within TA theory, each interpersonal interaction is a transaction in which a person can fill one of the three roles. Conflicts tend to arise when a person acts as a child or parent rather than as an adult.

Berne referred to interactions as games; he published a book, Games People Play, that outlined common games people play in their interpersonal interactions. These games involve the switching of roles at some point. For example, a person playing the child role might begin behaving as a parent halfway through the interaction. Games also follow a predictable pattern. A married couple might always fight using the same game, leading to a consistent pattern of conflict. Berne gave common games creative and memorable names such as “Now I've Got You, You Son of a Bitch” and “Yes, But....” Berne referred to game winners as white and game losers as black, alluding to the game of chess.

Berne also developed the concept of a racket to refer to a person who expresses “permitted feelings” rather than actual feelings. These permitted feelings are often patterns of behavior that were developed in childhood. The goal of a racket isn't usually to solve a problem or honestly express emotions. Instead, people engage in this behavior to manipulate the environment and other people, while following a familiar script. People engaged in racket behavior allow themselves to feel the permitted “racket” feelings and justify their behaviors and emotions while doing so.

Berne emphasized that healthy interactions involve an assessment that “I'm OK, and so are you,” rather than devaluing either oneself or another person in an interaction. Thomas Harris's self-help book I'm OK, You're OK further developed this theory. Berne's theories also influenced the author of the popular new-age novel, The Celestine Prophecy. The characters in this book often follow scripts and engage in games reminiscent of Berne's theories. 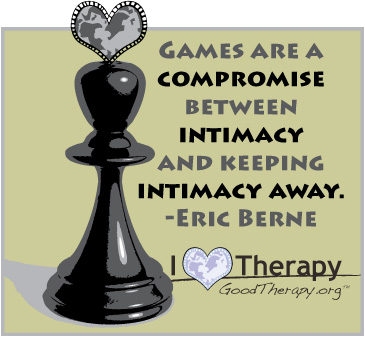