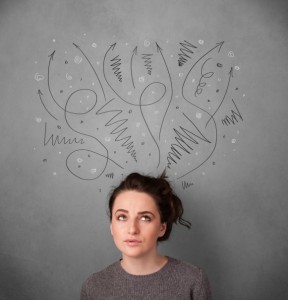 A thought disorder is a mental health condition that affects a person’s beliefs, thoughts, or perceptions. Thought disorders alter the way a person puts together ordered sequences of ideas and can affect a person’s behavior by causing them to experience paranoia, delusions, hallucinations, or other symptoms.

What Is a Thought Disorder?

Thought disorders are usually diagnosed when a person’s behavior or speaking indicates problematic, illogical, or incoherent patterns of thinking. Thinking normally involves three parts: thinking about something, stringing thoughts together on what you are thinking about, and, finally, the delivery or flow of a thought pattern. A thought disorder disrupts one or more aspects of the thought process.

A thought disorder is distinct from speech disorders, which occur as a result of difficulty with speech patterns and production, rather than an underlying problem with thought processes. Schizophrenia is a type of thought disorder, and delusions—false beliefs that a person persists in believing despite conflicting evidence—can also be caused by thought disorders.

How Are Thought Disorders Treated?

People with schizophrenia commonly demonstrate symptoms of thought disorders, but other mental health issues—such as bipolar, schizotypal personality, and psychotic episodes—can also produce symptoms of a thought disorder. Treatment often involves psychotherapy and in some cases may include antipsychotic medications or mood stabilizers.

Sometimes thought disorders can put people who experience them in danger. A person might, for example, believe something is safe that is unsafe, engage in risky behavior, or act on false beliefs that put others in danger. When a thought disorder interferes with safety, people with the condition may require psychiatric hospitalization.