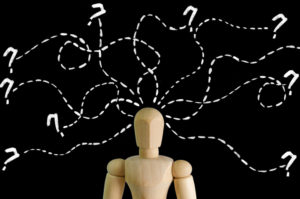 Tangentiality is the tendency to speak about topics unrelated to the main topic of discussion. While most people engage in tangentiality from time to time, constant and extreme tangentiality may indicate an underlying mental health condition, particularly schizophrenia.

Tangentiality and Mental Health
Everyone goes off on tangents sometimes. Indeed, it is the ability to modify the topic of conversation that often helps to move conversation forward. However, extreme tangentiality may indicate a mental health condition.

People experiencing mental health conditions may be so focused on their own internal dialogue that they are unable to focus on conversation or questions; in some cases, their internal dialogues may prevent them from understanding conversation. Tangentiality is also common during times of high anxiety. People experiencing anxiety may engage in tangentiality by talking excessively about seemingly unrelated topics or by being unable to listen to another person’s opinions or ideas. When tangentiality is caused by anxiety it is often short lived, but chronic tangentiality may indicate an ongoing problem with anxiety.

People who are victims of trauma may go on tangents either to avoid discussing the trauma or because they are so overwhelmed that they are unable to think clearly.

Examples of Tangentiality
Mentioning something that happened earlier in the day during a discussion about finances is an example of tangentiality, but is not extreme enough to warrant a diagnosis of a thought disorder. More troubling examples of tangentiality occur when a person repeatedly goes off on a tangent and is completely unable to participate in a discussion. Ongoing tangentiality may lead to communication problems with others and therefore negatively impact one’s interpersonal relationships. For example, when a therapist poses the question, “How was your week?” a person may respond with, “When I was five, my cat was killed.” When the therapist asks about the cat the person may then begin to discuss something completely different such as religious beliefs or previous illnesses.