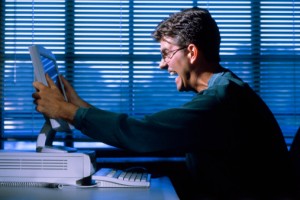 Rageaholic is a colloquial term used to describe people who easily succumb to their rage, demonstrating serious anger management problems. The term rageaholic is not a medical term, nor is rageaholism a diagnosable mental health condition, although uncontrollable rage may be a symptom of other conditions.

What Is a Rageaholic?

Anger is a normal human emotion, brought on by stressful events in daily life, but people who experience rage on a regular basis may have outbursts that quickly get out of control and become destructive. When anger gets out of control, rageaholics may feel as if they are being controlled by the emotion, that they are at its mercy. They might break things, scream at loved ones, and even assault friends, family, or strangers. People who tend toward rage may exhibit moments of extreme rage followed by long periods of normal behavior, calming down immediately after an explosive outburst and failing to understand why everyone else remains unsettled.

Anger management problems are often unsettling to the person experiencing the anger as well as any witnesses. A person with anger management difficulties might repeatedly try and fail to control his or her anger before it expands into rage. Though rageaholics may wish to change their anger by controlling or calming it, they might also experience a rush from feeling anger and may manufacture situations likely to create explosive conflict. Rage can be addictive: It allows a person to control others and may even be effective at extracting apologies and bribes from people who fear another outburst.

Rage as a Symptom

Rage may indicate an underlying mental health problem. Men in particular may manifest sadness and depression as rage. Angry outbursts can also stem from anxiety, and people with narcissistic or antisocial personalities may deliberately use anger or threats of anger to control and manipulate others. Mothers experiencing postpartum depression may also experience extreme rage, as might those who are bipolar.

The term rageaholic was originally coined as an outgrowth of the term alcoholic, and the 12-step model used to help those experiencing alcohol addiction has been adapted to address rage problems. Some people with anger issues opt to attend 12-step group meetings to receive support, advice, and feedback from other people who have overcome rage issues. Psychotherapy can also be effective at treating rageaholism, and when rage interferes with interpersonal relationships, family or marital counseling can be helpful.

People experiencing anger addiction may also benefit from working through anger on their own, using techniques such as relaxation exercises or cognitive restructuring. Cognitive restructuring is a way of changing one’s thinking: using this technique, a person might attempt to replace the exaggerated, extreme thoughts that accompany their rage with more rational thinking, such as a reminder that problems or issues can be fixed, though not with anger.