How to Handle an Argument with Your Partner 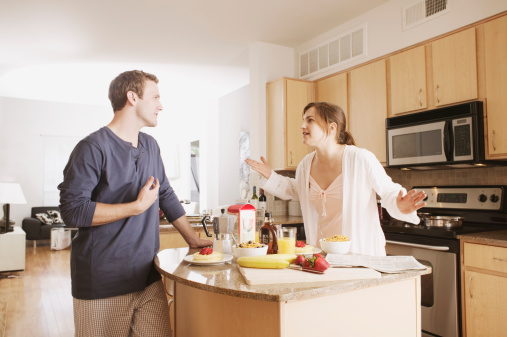 Do you and your partner have arguments that go round and round and seem like they recycle the same information over and over?

Max: Didn’t I tell you the reason I told your mother …

Melinda: No, that is not the reason you said at the time. If you had said what you’re saying now, I would have handled it differently. I don’t understand how you could change things so much.

Max: Why do you keep insisting I said something I never said? What I said was …

And so on. Some of these back-and-forths can take weeks to stop recycling themselves.

Why does this happen? And more to the point, what can be done about it?

What’s Behind the Arguing?

Human beings were built to connect with one another. In being connected, we chase away a sense of being alone. Connection, of course, requires us to understand one another. Ironically and unfortunately, we can feel most alone when we are with someone who does not understand us.

Arguments such as the one Max and Melinda are having are attempts—however unsuccessful—to repair damage and connect, finally. The arguments are doomed to fail because of the way the participants go about it, but that is not what’s important to consider right now. What is important, I think, is these people desperately want to connect, as evidenced by the amount of energy they put into their conflict.

Another important piece here is that Max and Melinda want to connect on their own terms. This is not because they are selfish or controlling, but because they don’t know another way.

What Are They Doing Wrong?

Do you ever notice how, in a heated argument, no one involved is really listening? Each person is desperately trying to get a point across at the same time the other person is doing the exact same thing.

How can they possibly expect to meet somewhere in the middle? They don’t know what the other person is talking about, let alone how to reconnect and resolve the issue.

Why does it seem as if what they really want is to win? And where does winning get them, exactly?

People who have learned to argue like this have, like most of us, at one point or another been made to feel small or ashamed. As much as they want to connect, they don’t want to lower themselves—by “losing” the argument, by being “wrong”—in the process.

What Can They Do About It?

A necessary ingredient for a successful exchange in which two people may see things differently is to make sure the other person feels emotionally safe.

Think about it: if Max and Melinda are quite certain they will get bashed, blamed, or somehow made to feel small or stupid, they likely will continue in attack/defense mode. But if each makes clear, repeatedly, that no matter how difficult it becomes they will avoid hurting the other in any way, then the chances of a round-and-round thing decrease dramatically.

Here are some things they need to be careful of:

Instead, it’s a good idea to:

One couple I worked with argued about food. They both worked long hours. The wife, who took pride in her cooking skills, would make delicious meals and be insulted when her husband would snatch a cookie from the cupboard. She got angry at him and they argued.

What was going on?

First, the wife took her husband’s culinary preferences personally. Looking at the issue from another angle could help her relax. If she liked the food she cooked, great. If her husband enjoyed it, so much the better. If he wanted other food too, it wasn’t necessarily a rejection of her cooking, let alone her, and it wasn’t helpful to interpret it as such.

Why does it seem as if what they really want is to win? And where does winning get them, exactly?

Second, it was perfectly reasonable for her to be disappointed. Disappointments are a part of life—rain on a beach day, the movie was a bore, the new gadget didn’t meet expectations. We can acknowledge the feeling of disappointment, surmise that on a 1-to-10 scale it’s about a 3, and move on.

Third, it wouldn’t hurt to express her feelings to her husband provided she does it as a statement of her feelings and not an accusation. He, in turn, might acknowledge her feelings and be gentle but honest about his own. If he didn’t love the meal but wants to soothe her, he can mention that although it was good and he appreciated it, he prefers foods that are less salty (or whatever). He can also offer to do the cooking the next night (and she, of course, can feel free to not like it).

If you need help resolving communication problems in your relationship, seeking the help of a trained couples counselor can be greatly beneficial. A good relationship always has differences. Making an effort to truly understand each other, rather than reacting emotionally in the moment, is key. The goal isn’t to win or even to agree; it’s for both parties to feel heard, to feel like what they think matters. That’s what fosters intimacy and draws two people closer together.