110 of 111 NFL Brains Found to Have Brain Condition, and Other News 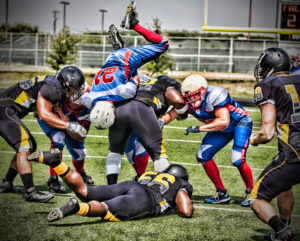 Of 111 brains of former National Football League (NFL) players, a neuropathologist found 110 brains had chronic traumatic encephalopathy (CTE). These findings were published this week in The Journal of the American Medical Association.

CTE is degenerative brain condition that is common in those with a history of repetitive brain trauma. Symptoms can affect a person’s behavior and mood, and some of these changes may result in depression, aggression, impulse control issues, or paranoia. Eventually, some people with CTE may develop memory problems or dementia.

This study provides significant scientific evidence that football players are especially susceptible to CTE, a condition that can only be diagnosed upon brain inspection after death. Last year, the NFL publicly acknowledged the link between football and CTE after years of avoidance on the topic. Since then, the NFL has started to implement some changes regarding player health and safety, such as developing safer tackling techniques and promoting flag football for children.

England is testing a new national experiment on mental health treatment. Clinics all over the country are beginning to offer talk therapy completely free of charge. According to experts, this initiative is the first real-world test on a broad scale, and the number of adults who receive mental health treatment has increased from 1 in 4 to 1 in 3. This number is further expected to grow as the initiative works to decrease stigma surrounding mental health issues.

Exercise Has a Cascade of Positive Effects, Study Finds

People who exercise may have better social lives and achieve more of their goals, according to research that recorded the activity levels of 179 college students. Students who exercised on a particular day were also more likely to socialize on that day and to report achieving a goal. Previous research has found exercise can improve mental health, including by alleviating symptoms of depression and anxiety. This study sheds light on one mechanism through which exercise might improve mental health—by supporting socialization and giving people a sense of accomplishment.

The brain “sees” more than the eyes consciously register. The sensation that one is being watched may be due to the brain picking up nonvisual cues in the environment. Fixating on that feeling can also trigger the sensation, so a feeling of being watched may not always be cause for alarm.

Mice who consumed an appealing high-fat diet displayed signs of withdrawal when researchers switched them to lower fat foods. When the high-fat foods were reintroduced, the mice were more likely to binge eat. The research suggests the change is stressful to mice, and may help explain why humans struggle to stick with dietary changes.

A Possible Path to Better Sleep—and a Better Memory

Better sleep may improve memory as much or more than cognitive games. New research suggests pink noise—similar to white noise, but with individual sounds at the same frequency—may offer a simple, drug-free path to better sleep.

Brains Are More Plastic Than We Thought

Researchers have long known about neuroplasticity—the ability of the brain to change in response to experience. New research suggests it is even more plastic than previously thought. The study showed brain training can render the brain’s middle temporal region either critical for vision or completely irrelevant. This could have important implications for stroke and other brain injury survivors, as training the brain to work around an injury can restore some brain functioning.

The Republican-backed health care bill currently allocates $45 billion to combat opioid abuse. Opioid addiction has increased over the past decade, claiming tens of thousands of lives. Analysts say this sum is not enough to provide services to all who need them. Cuts to Medicaid funding could further reduce or eliminate services to people with opioid addictions who are currently seeking care through the Medicaid system.