Find a Therapist in Florida

Welcome to the Florida therapist directory at GoodTherapy.org. Our directory is the fastest and safest way to find a good counselor or therapist in Florida cities. We only include professional therapists, counselors, and psychologists whose work accords, in attitude and orientation, to the elements of good therapy. Find a therapist or counselor in your Florida zip code, or click on the links below to see the counselors in your city:

According to the Bureau of Labor Statistics (BLS), the state of Florida employed 83,080 people in social service and community-related professions in 2015. Occupations in this field included work as marriage and family therapists, counselors at residential treatment centers, community health workers, child psychologists, clergy members, parole officers, guidance counselors, and depression treatment therapists. In Florida, residents in this career field and related jobs earned an average annuall wage of $43,350 and served an estimated population of 20.2 million people. 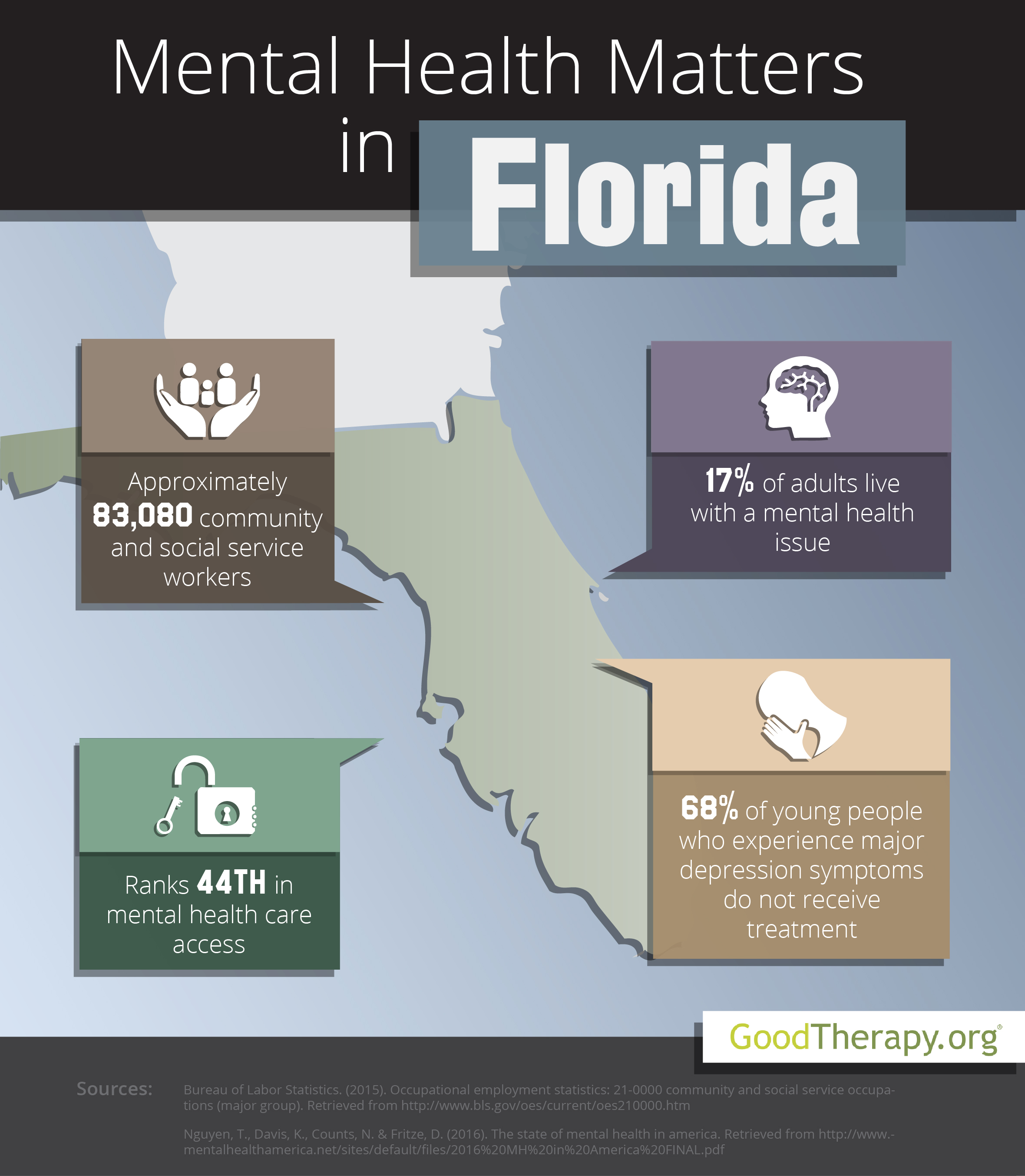 The mental health of young people within the state is also of paramount concern to mental health providers. The Substance Abuse and Mental Health Services Administration (SAMHSA) claims the percentage of adolescents in Florida who perceive no significant risk from smoking cigarettes daily decreased from 33.4% in 2009 to 29.6% in 2013. The national average for this behavioral health category in 2013 was 35%. At 4.9%, the percentage of teenagers in Florida who smoke cigarettes was lower than the national percentage of 6.1% in 2012-2013.

While these statistics show a relatively low percentage of cigarette use among young people, both the SAMHSA 2014 report and the MHA 2016 survey indicate the use of drugs—such as marijuana, cocaine, heroin, hallucinogens, nonmedical psychotherapeutics, and inhalants—among adolescents is a major concern for therapists in Florida. The SAMHSA report shows the percentage of teens who perceive no significant risk from smoking marijuana once a month increased from 68.1% in 2009, to 73.7% in 2013. According to the 2016 MHA study, Florida is ranked a mid-range 24th for young people with dependence on alcohol or drugs.