Albert Bandura is a contemporary psychologist specializing in developmental psychology and educational psychology. Much of his work centers around social learning theory. He is one of the most widely-cited psychologists of all time.

Albert Bandura was born in Alberta, Canada, in the small town of Mundare. He was the youngest of six children, two of whom died in youth, one from a hunting accident and another from the flu pandemic. Bandura’s parents were hardworking and self-educated. They instilled in him a joy for celebrating life and the importance of education. His primary education was explorative and practical, as the school he attended was led by only two teachers and had limited resources for educational materials. Bandura saw this as an advantage, as he was forced to rely on his own inquisitiveness and the world around him to grasp the concepts that would serve to further his knowledge.

After finishing school, Bandura went to the Yukon to help protect the Alaskan Highway from sinkholes. Upon his return home, he was given the choice between staying on the farm in the remote, socially limited town and continuing his education.

Bandura entered the University of British Columbia and stumbled onto his career by choosing a psychology class as a filler for his curriculum. He instantly fell in love with the field and earned his BA in only three years and was awarded the Bolocan Award in psychology. He continued his studies at the University of Iowa where he earned his MA and his PhD.

While at the University of Iowa, Bandura studied under Kenneth Spence and was influenced by his predecessor, Clark Hull. Bandura began experimenting with imagery, reciprocal determinism, and representation. He began to develop a set of theoretical and analytical skills and was able to offer psychologists a new approach to the evaluation of the mental process, aside from the traditional model of psychoanalysis. Bandura interned briefly at the Wichita Kansas Guidance Center and eventually began teaching at Stanford University in 1953, where he has remained ever since. He currently holds the position of professor emeritus.

Bandura began his research endeavors by focusing on human motivation, action, and thought. He worked with Richard Walters to explore social aggression. Their study emphasized the impact of modeling behaviors and gave way to research in the area of observational learning.

His best-known study is the Bobo Doll Experiment. This study exposed children to adults behaving aggressively toward a doll; it demonstrated that children behave aggressively when aggression is modeled by adults. However, if the adult was punished for hitting the doll, children were less likely to hit the doll. The experiment has frequently been cited by opponents of media violence, but it has also been criticized on ethical grounds because it exposed children to violence. Bandura emphasized that children learn in a social milieu and often imitate the behavior of others—a process known as social learning theory.

Bandura developed his social cognitive theory from a holistic view of human cognition in relation to social awareness and influence. He emphasized that behavior is guided by a combination of drives, cues, responses, and rewards. For example, a child might have a drive to eat candy, and this desire can be reinforced if the parent responds by eating candy with the child or rewards the child with praises for eating candy.

His theory of moral agency is an offshoot of his social cognitive theory. Moral behavior is a product of self-regulation, but a person’s self-regulation has to be activated in a social context. Bandura argues that people have two choices: to act humanely or inhumanely. Inhumane behavior becomes possible when a person can justify such behavior. This justification involves a kind of “cognitive restructuring,” which follows a specific pattern. Sanitizing language, which removes the weight of cruelty from an action, is a key component. For example, referring to genocide as elimination, or racial cleansing, removes the messy and cruel element of the behavior. Other methods for justification include moral justification; social comparisons that relieve participants of moral obligations and personal agency; minimizing the harm caused to another; and displacing responsibility onto another person or an entire group. Blaming or dehumanizing the victim is often a key ingredient in inhumane actions.

He has published several books that explore social cognitive theories, self-organization and regulation, and self-efficacy. He has won many awards, including the Grawemeyer Award in Psychology in 2008. He has been listed as one of the most influential figures in modern psychology, and is cited fourth behind Skinner, Freud, and Piaget. He is often described as the “greatest living psychologist.” 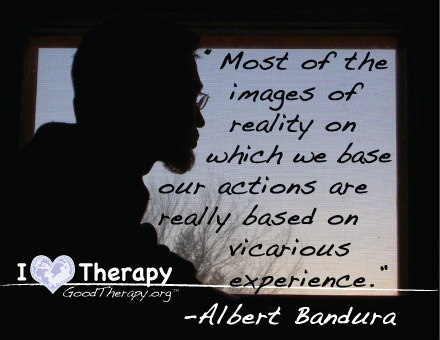