The Self-Portrait as a Form of Therapy 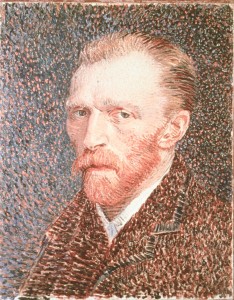 Is it so strange to want to chronicle and capture your changing visage through the years in the form of artistically altered photographs? There has been a lot of conversation in recent months surrounding people who obsessively photograph themselves and post those pictures online for all to see, otherwise known as the selfie trend.

Even we jumped on the bandwagon of speculation about what’s really going on with this phenomenon. The self is fascinating; after all, it’s who you are. We seek a deeper understanding of this inward being in a variety of ways: journaling, creative expression, conversation, counseling, and, yes, the self-portrait.

Throughout history, artists have devoted themselves to this eye-catching craft of self-understanding. Vincent Van Gogh and Frida Kahlo are just two examples of the myriad artists who became renowned for their ability to capture the self in compelling portraits.

From 1886 to 1889, Van Gogh painted over 30 canvases of himself, and Kahlo, who began her work in self-portraiture while recovering from a debilitating accident in a full body cast, produced 55. She is quoted as having said, “I paint myself because I am often alone and I am the subject I know best” (Frida Kahlo Foundation, 2002–2013).

These days, though the painted canvas is still prevalent in self-portraiture, the artistic rendering of the self via photograph is being snapped and shared by the millions—on Facebook, on Instagram, and in the professional photography world, as well. Depression, grief, loss, injury, and navigating the rises and falls of the human journey have inspired countless works of photographic art involving the photographer as subject. Following are just a few examples of this self-centered form of modern artistry—and healing.

One man, 20-year-old Christian Hopkins, uses photography as a way of dealing with depression. His self-portraits include surreal images of several hands being trapped inside his skin, wings made with fragile materials protruding from his shoulder blades, one showing his left wing broken and in pieces, the other very sparse but intact.

He is also shown with a fabricated slit through the throat made of a zipper with strands of black yarn mimicking blood. The photos are haunting, but most importantly, Hopkins says they help him process the complicated emotional experience of his bouts of depression.

Self-Portrait for Feeling Powerless and Stuck

Ben Zank, a New York-based photographer, chronicles his feelings of “being powerless, stuck, being free again, etc.” in a series of self-portraits featuring natural elements colliding with the confining aspects of human existence. In one of these, he is shown lying face down on a paved road with the two yellow stripes running directly over his head; in another, he is trapped between two icy rocks, struggling to break free.

He also photographed himself with his head wrapped in twine and tied to a tree, as well as with lengths of twine tied around his fingers and anchored to the ground. Both of these scenes seem to reflect the experience of being stuck.

Following repeated knee injuries, former-dancer-turned-photographer Ingrid Endel photographs herself in stunning dance-oriented poses. The Australian artist creates surreal imagery that beautifully captures the sense of loss associated with no longer being able to perform as a dancer, as well as the joy of discovering another art form through which she can express herself.

The photographs show her body in a variety of outdoor scenes: lifting off the ground with legs wrapped in vines; leaning (or falling?) backward in a dancer’s pose with electric red cords protruding in all directions from her chest; and being enveloped in cocoon-like cobwebs while contorted on the forest floor.

Endel includes photographs of her moments of stillness in which she appears to be accepting and embracing her body as-is; one in particular shows her looking perfectly content while engaged in a stretching pose in the middle of a body of water.

Self-Portrait for Personal Change and Transformation

Another way to use the self-portrait is to process normal, yet significant, changes in life, which can become stressful if not handled healthfully. One woman, Sophia Starzenski, a photographer based in Buenos Aires, took photos of her near-naked body as she moved through pregnancy.

The photographs reveal her steadily expanding belly throughout the nine months of being with child, and the final shot shows her with two-month-old babe in arms. By capturing the raw beauty of this commonplace transformation, Starzenski presents the changing female body as a work of art—something to be celebrated and shared rather than hidden and shamed.

Self-Portrait for Illness and Grief

Still others use the self-portrait as a means of coping with insurmountable changes in the lives of their loved ones, which inevitably affect them, too. When his wife Jennifer was diagnosed with breast cancer, Angelo Merendino chose to document the experience through photographs taken mainly of his wife, although he appears in a few of them.

The series starts with the couple looking healthy and happy, drinking while sitting on a front stoop, and then lying in bed together with serene smiles and an intimate embrace. The photographs grow increasingly bleak, however, as Merendino captures his wife’s physical deterioration and eventual death on camera.

Though they depict illness, grief, and loss, the photographs also show the beauty of family coming together in trying times and of final moments treasured and savored. Following his wife’s passing, Merendino published a book of the images, The Battle We Didn’t Choose: My Wife’s Fight with Breast Cancer, and went on to start a non-profit called The Love You Share (theloveyoushare.org) as a means of providing financial assistance to women battling breast cancer.

The Tutu Project (thetutuproject.com), which “began in 2003 as a lark,” is another instance of a man using self-portrait photography to deal with life in general and eventually, with his wife’s breast cancer. When his wife Linda was diagnosed in 2006, Bob Carey began taking his ongoing photographs of himself wearing only a pink tutu to a new level. As a means of alleviating his own emotional distress and lifting Linda’s spirits, he traveled the United States—and Italy—snapping pink tutu photos in various places.

Their story inspired a video created by Deutsche Telekom in Germany (below); in it, Linda says, “It just makes me laugh, to see my husband dancing around in a pink tutu. It helps me be positive. The more I laugh, the better I feel.”

To help support other women who are in need of funds beyond what insurance provides as they navigate the breast cancer experience, the couple established The Carey Foundation in 2012 (careyfoundation.org), and they continue to spread the simple pleasure of the pink tutu in Ballerina, a hardcover collection of Bob’s self-portraits and the stories behind them.

Judy Weiser, director of the PhotoTherapy Centre in Vancouver, British Columbia, as well as psychologist, art therapist, and author, has spent over 35 years exploring, developing, and implementing “PhotoTherapy” techniques. On the PhotoTherapy Centre’s website (phototherapy-centre.com), Weiser details extensively the therapeutic benefits of photography in its various forms.

Regarding the self-portrait as a mode of healing, she says, “Since issues connected to self-esteem, self-knowledge, self-confidence, and self-acceptance lie at the core of most clients’ problems, being able to see themselves for themselves, unfiltered by the input or feedback of others, can be a very powerful and therapeutically beneficial encounter.” She goes on to explain how this in-depth confrontation and exploration of the self through photography is known to catalyze “deep process work in therapy situations.”

Though the PhotoTherapy Centre now exists primarily as an archival collection of online information and resources, Weiser still provides training opportunities for mental health professionals in the techniques of PhotoTherapy, as well as social media support and guidance via the Centre’s Facebook group.