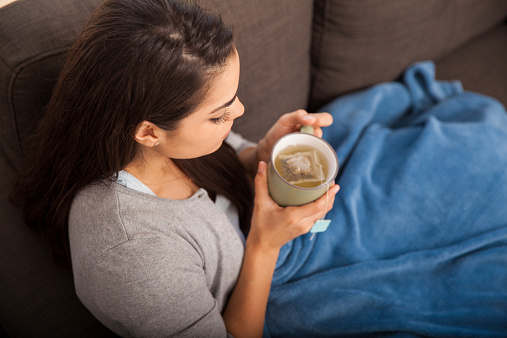 PMS is believed to affect up to 3 out of 4 of those who menstruate. Symptoms may range from mild to severe enough to interfere with daily life. Premenstrual dysphoria (PMDD) is considered to be a more severe form of PMS. Symptoms with PMDD are mostly related to changes in mood and are more likely to lead to difficulty with relationships, work, school, and other aspects of daily life.

Symptoms of PMS or PMDD begin in the second half of the cycle, 14 or fewer days before menstruation begins.

What Are the Symptoms of PMS?

Not all experience PMS, and for those who do, the symptoms vary widely. In some, symptoms may be barely noticeable, and in others they may be quite intense.

Whether they are severe or mild, symptoms typically follow a predictable pattern and may include:

Exactly what causes PMS is not known, but several factors may be involved. Pain and cramping in the stomach, back, hips, and/or legs result from the contractions of the uterus as it expels its lining. It is believed the hormonal shifts in the brain can cause temporary alterations in mood as well as physical symptoms. A high level of prostaglandins—a group of lipid compounds—may also increase symptoms of PMS.

Illnesses such as polycystic ovarian syndrome, uterine fibroids, and endometriosis can result in severe PMS. Symptoms of PMS that interfere with normal functioning are often a symptom of an illness other than PMS.

PMDD is a more serious form of PMS believed to affect 3-8% of those who menstruate. Symptoms differ from those of PMS in that they are more likely to be related to changes in mood than physical discomfort. With PMDD, symptoms are severe enough to impact daily function, especially interpersonal function. One of PMDD’s noted effects is its impact on personal/professional relationships. Research suggests PMDD may be caused by the interaction of hormones and neurotransmitters such as serotonin.

For PMDD to be diagnosed, five or more of the following symptoms must be experienced for two consecutive menstrual cycles:

At least one of the symptoms experienced must be tension, irritability, mood swings, or depressed mood, in order for PMDD to be diagnosed.

How Is Premenstrual Syndrome Treated?

Most women can alleviate physical symptoms by taking pain-alleviating drugs such as ibuprofen. Exercise can also help relieve cramping. Some women find that drinking plenty of water, getting regular sleep, and/or eating a balanced diet can improve symptoms. Hormonal birth control pills can alleviate symptoms in some women, and several birth control manufacturers now market their pills based upon their effect on symptoms of PMS.

Herbal remedies, nutritional supplements, and some types of therapy, such as light therapy and CBT, may be effective at treating symptoms of PMS and PMDD. In some cases of PMDD, SSRIs (psychotopic antidepressants) may be prescribed.

Stigma and Critique of PMS

Some feminist groups have also criticized PMS as a way to dismiss women. They argue PMS is used to support the myth that women are overly emotional or make bad decisions. The idea that women are less psychologically competent for several days each month could be used as basis for the denial of certain opportunities.

However, PMS does occur in many, and treatment can help relieve symptoms. Due to stigma associated with the menstrual cycle, however, some who experience PMS or PMDD may be reluctant to discuss the topic with their doctor, and some doctors may dismiss symptoms, believing them to be a normal part of the menstrual cycle or not as serious as they seem. Symptoms of PMDD, in particular, however, may necessitate treatment to prevent social and daily impairment.