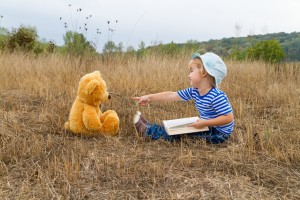 Imaginary friends, or companions developed from one’s imagination, are most often created by young children, though adolescents and adults may also report their existence. Having an imaginary friend is considered to be an aspect of normal psychological development.

An overwhelming majority of mental health professionals believe it is perfectly normal for young children to cultivate relationships with imaginary companions and/or personified objects, such as toys that are given human traits and characteristics. Children may lose interest in one imaginary friend when they create a new one, and they commonly discard imaginary friends for good as they age and develop bonds with real playmates.

Though the exact mechanisms are currently unknown, many psychologists believe that imaginary friends play a crucial role in the social, emotional, and cognitive development of young children. With imaginary companions, children are able to imitate the various forms of interpersonal communication observed between adults; they may also learn to develop conflict resolution skills or freely express their innermost thoughts and concerns without fear of an adverse reaction.

Having imaginary friends may also help children develop an early appreciation for abstract thoughts, symbols, or situations. Almost all the children in the 2004 study claimed they had previously pretended to be an imaginary character themselves. The researchers found that 4-year-olds who practiced this form of impersonation scored higher on emotion understanding by age 7 than children who did not engage in impersonation.

Though imaginary friends have been viewed in a negative light, most modern day researchers believe creating an imaginary companion can be beneficial to children in both pathological and non-pathological contexts. A major contributing factor to the negative perception of imaginary friends was the suggestion of mental health experts that these companions were most likely created to fill a void or deficit in the lives of young children.

However, imaginary friends are generally now known to be a healthy component of play, as they can provide a way for children to develop creativity while simultaneously demonstrating competence and understanding of the world in a safe environment. Imaginary friends can also help children cope with fears, anxiety, stress, trauma, and other challenging emotions or situations. Children who lose a sibling may often cope with and partially resolve their grief by continuing to speak to and play with their deceased sibling, for example.