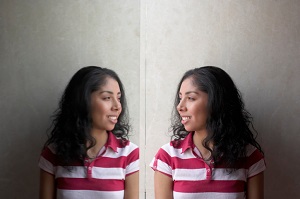 Déjà vu, a French term meaning “already seen,” describes the overwhelming feeling of already having experienced something that is actually being experienced for the first time. This phenomenon is sometimes accompanied by strong emotions, particularly feelings of nostalgia.

A number of different theories have attempted to explain déjà vu, but the exact cause is still unknown. Most people will experience déjà vu at least once, and some people experience it often. The sense of familiarity with an event or occurrence is often so all-encompassing that it seems as if it has happened in exactly the same way, and this is often disconcerting when coupled with the knowledge that the event has never happened before.

An example of déjà vu might include a concert attendee who, while seeing a band play for the first time, feels overwhelmingly as if they have seen that particular show before, despite having the knowledge this is not possible. Sometimes déjà vu may be less specific, and people experiencing the phenomenon sense that something is familiar about their current experience, but cannot figure out what precisely the source of the familiarity is.

Déjà vecu, a condition that has been studied by neuropsychologist Chris Moulin in England, is understood as the experience of having persistent, or even constant, déjà vu. While déjà vu is typically fleeting, an individual who experiences déjà vecu may feel as if an entire series of events is familiar. In extreme cases, the experience can impact one’s life, such as when an individual refuses to watch television because they believe they have already seen the shows. This is considered to be a more significant memory problem than déjà vu, and people who have it are often unaware of the condition. Rather than experiencing a brief moment of familiarity, an individual with déjà vecu perceives experiences as actual memories, though the experiences have never happened before.

Mental health professionals continue to debate the precise cause of déjà vu, but most agree it is essentially an anomaly of memory. Memory is notoriously unreliable, and because people can remember things that did not actually happen, they may also feel familiar with things with which they have no familiarity. In some cases, there may be an issue with the interplay between long- and short-term memory. Current experiences are held in working or short-term memory, but the mind may perceive them as being part of the long-term memory.

Sensory experiences can also contribute to déjà vu. For example, smelling a familiar smell or hearing a familiar sound can cause some people to feel that an entire situation is familiar. Highly emotional experiences may also activate feelings of déjà vu.

Some health conditions are linked with frequent feelings of déjà vu, including epilepsy and schizophrenia. However, déjà vu is not itself a diagnosable condition, and the phenomenon itself is fairly common

Some new-age spiritualists and religious fundamentalists have argued that déjà vu is a prophecy or a form of spiritual enlightenment. However, brain research indicates it is largely a brain phenomenon, and episodes of déjà vu have not demonstrated any tendency to be prophetic.

Many people know of déjà vu but are likely less familiar with the following related phenomena: