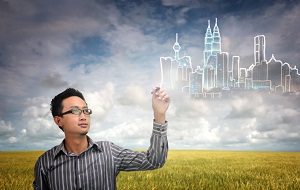 Active imagination is a process in Jungian psychology used to bridge the gap between the conscious and unconscious minds.

Carl Jung argued that dreams and other unconscious images can be particularly vivid when these images attempt to make their way to the conscious mind. Through the process of active imagination, these images may become less vivid and allow the contents of the unconscious mind to healthily integrate with the conscious mind. Jung cautioned that the process of active imagination had to be done carefully because it could cause a disconnect with reality.

Active imagination is intended to bring about a state of hypnagogia. This is the state in between sleep and wakefulness, where people may be partially aware that they are dreaming. Jung argued that active imagination can be achieved naturally during intense states of relaxation such as when listening to a story or drifting off to sleep.

Active Imagination in Contemporary Psychology
In contemporary psychology, the term active imagination is most commonly associated with a tendency to have a very creative and present imagination rather than with the Jungian process. However, dream analysts may still use the process of active imagination to help people understand the meaning of their dreams, resolve hidden interpersonal conflicts, and work past pressures placed on the conscious ego by the unconscious mind.