Viktor Frankl was a 20th century psychiatrist who founded the field of logotherapy. A Holocaust survivor, he wrote the best-selling book, Man's Search for Meaning.

Viktor Emil Frankl was born on March 26, 1905 in Vienna, Austria. He received his MD and PhD degrees from the University of Vienna where he studied psychiatry and neurology, focusing on the areas of suicide and depression. As a medical student in the late 20s, he successfully counseled high school students to virtually eliminate suicide. Because of these accomplishments, he was asked to head the suicide prevention department of the General Hospital in Vienna. After treating thousands of people over the four years he was there, Frankl took a position as the head of the neurological department at the Rothschild Hospital, one of the few facilities that allowed Jews to practice medicine at that time.

In 1942, Frankl and his parents, wife, and brother were arrested and sent to the Thereisienstadt concentration camp; Frankl’s father died there within six months. Over the course of three years, Frankl was moved between four concentration camps, including Auschwitz where his brother died and his mother was killed. Frankl’s wife died at Bergen-Belsen. When Frankl’s camp was liberated in 1945, he learned of the death of all his immediate family members, with the exception of his sister who had emigrated to Australia. In the camps, Frankl and fellow prisoners made an effort to address the despondency they observed in other inmates. In an effort to prevent suicide attempts, Frankl and others tried to help other inmates facing severe depression by encouraging them to reflect on positive memories, scenes, and thoughts.

Frankl used his experiences in the camps to develop his theory of logotherapy, sometimes referred to as the “Third Viennese School of Psychotherapy,” because Frankl came after Sigmund Freud and Alfred Adler. Frankl believed that even in the midst of dehumanizing and atrocious conditions, life still had meaning and that suffering had a purpose. Frankl thought that during extreme physical circumstances, a person could escape through his or her spiritual self as a means to survive seemingly unbearable conditions. He believed the spiritual self could not be affected by external forces. Frankl spent most of his later career studying existential methods of therapy.

Frankl wrote Man’s Search for Meaning, a groundbreaking book that detailed his perspective of living through the ordeal that was the concentration camp. He was a professor of neurology and psychiatry at the University of Vienna from 1948–1990, and he directed the neurology department at the Vienna Polyclinic Hospital between 1946 and 1970. Throughout his career, Frankl published numerous books, received dozens of honorary degrees, lectured around the world, and served as a guest professor at universities including Harvard, Southern Methodist, and Duquesne.

Frankl's book Man's Search for Meaning has been widely cited as one of the most important and inspirational books of the 20th century. In the book, he outlines three phases of adapting to life in a concentration camp:

Frankl argues that finding meaning in everyday moments can enable trauma survivors to avoid the bitterness and apathy that are so often the results of torture, imprisonment, and prolonged trauma. He encourages trauma sufferers to think of people they would not want to disappoint, such as dead or distant family members, and to reflect on how they would like to be perceived by these loved ones. Frankl believes meaning can be found through creativity and work, human interaction and experience, and the manner in which we respond to inevitable suffering.

Frankl's logotherapy is based on the philosopher Soren Kierkegaard's “will to meaning.” Frankl draws upon Kierkegaard's philosophy in arguing that the primary drive in life is the search for meaning—not the drive to sex or pleasure, as Freud theorized, or power, as Nietzsche and Adler argued. Logotherapy is a form of existential therapy that emphasized that people have the power to find meaning in anything they do. 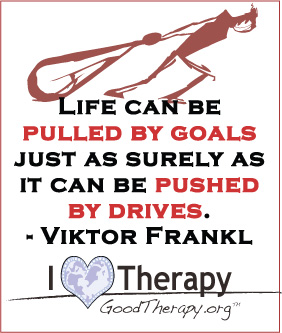