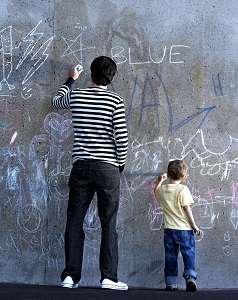 Mimicry is the process of imitating another person.

What is Mimicry?
Mimicry plays a major role in developing social skills, and social animals—including some non-human animals—have been shown to engage in mimicry. Mimicry can facilitate social interactions and feelings of warmth and friendliness. It also plays a role in fostering belonging and community, because people who act similarly tend to have fewer difficulties getting along. Mimicry occurs on a continuum, and can involve imitating very simple behaviors—such as rapidly blinking—or very complex ones, such as kicking a ball while adopting a certain posture or facial expression.

Mimicry’s Role in Learning
Mimicry plays a significant role in learning, particularly learning social skills. Children frequently mimic their parents and often engage in pretend play mimicking their parents’ roles. For example, a child might dress up like a doctor to be like his or her mother or imitate his or her father cooking. Parents often build upon these first steps to help shape children’s personalities and skills. A child who mimics his or her mother reading, for example, might learn from the mother to sound out the words.

Mimicry can also play a role in developing unhealthy behaviors. Children whose parents smoke, for example, are more likely to smoke themselves. They may begin imitating their parents’ smoking behavior from an early age and then eventually pick up smoking because it feels normal.

Children with some developmental disabilities, particularly children on the autism-spectrum, may not imitate as frequently as other children, and this may partially account for their potential challenges with empathy and social skills.

Unconscious Mimicry
People sometimes imitate the behavior of others without even noticing it, and some body language experts advise people to adopt body language similar to that of others. For example, a person interviewing for a job might unwittingly cross his or her legs in the same way as the interviewer or blink his or her eyes using the same pattern the interviewer uses when he or she blinks.