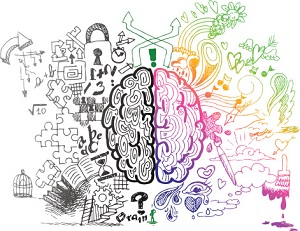 Lateralization characterizes the tendency of the hemispheres of the brain to perform different functions.

What is Brain Lateralization?

The brain is divided into a right and left hemisphere, though these hemispheres are not entirely separate. The two halves are connected by the corpus callosum, a bundle of nerve fibers. Each hemisphere tends to specialize in different tasks. Broadly speaking, the left side of the brain tends to control language, while the right tends to control visual imagery. Other specializations of each hemisphere include:

Some researchers argue that brain lateralization has been greatly overstated. For example, gender difference research has demonstrated that women women tend to use both sides of the brain more equally than do men. Some brain researchers have argued that this research is misleading, and some studies have shown that the brain is much less lateralized than previously thought.